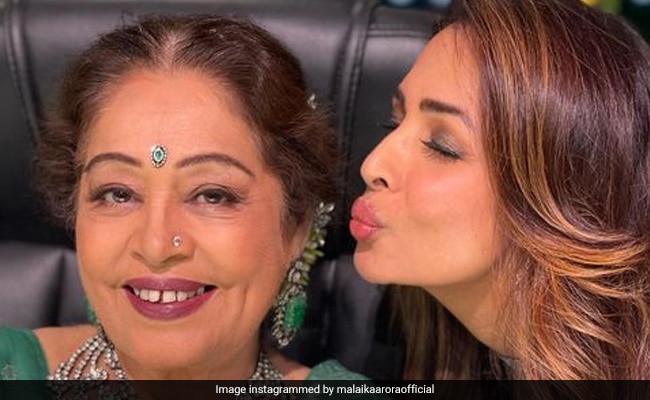 Gorgeous Malaika Arora has shared a post featuring veteran actress Kirron Kher as the former makes a comeback on popular TV show India's Got Talent Season 9. In the post, Malaika is kissing Kirron, while the latter flashes her million-dollar smile. Both the actresses looked stunning-Kirron Kher, as usual, can be seen wearing a beautiful saree, accessorising her look with an emerald necklace. While Malaika Arora, on the other hand, glows in a silver sequin gown. Sharing the image on Instagram, she wrote, "Reunited with the one n only , the OG kirronkhermp ..... love you ma'am #igt sonytvofficial"

For the unversed, Malaika Arora has been judging the reality-based TV show India's Got Talent since season 1, before being replaced by actress Shilpa in the current season. However, as per the reports doing rounds, Shilpa has taken a break, and this weekend, Malaika will be filling her shoes.

Season 9 of India's Got Talent is hosted by Arjun Bijlani. Apart from Shilpa, the other judges are Kirron Kher, rapper Badshah and lyricist-poet, and screenwriter Manoj Muntashir.

Talking about the show, every week, celebrity guest is invited to encourage the contestants. This week, rumours are rife that actress Tamannah Bhatia will be coming on the show. However, viewers will have to wait for the show to air.