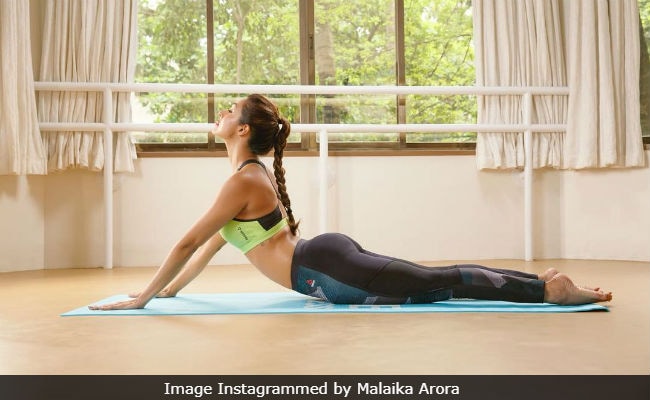 Malaika Arora never fails to give us fitness goals and her latest Instagram post is not an exception. With International Yoga Day around the corner (June 21), Malaika is already one step ahead. The 44-year-old actress shared a picture of herself, doing yoga, on Instagram. In the picture, she can be seen sporting a neon green bralet and a pair of printed tights. Malaika captioned the post: "Inhale, exhale and immerse yourself in a world of well-being. Celebrating international day of Yoga." The picture received over 94,000 likes within a few hours and we are not surprised. Remarks such as "true inspiration to all" and "You give us fitness goals," kept popping up in the comments section.

Promoted
Listen to the latest songs, only on JioSaavn.com
Take a look at Malaika's post here.

Inhale. Exhale. And immerse yourself in a world of well-being. Celebrating international day of Yoga with @ReebokIndia #IDYwithREEBOK #ReebokIndia #FashionablyFit

Malaika Arora has quite a bit of a reputation for sweating it out in the gym and is frequently seen working out with her Pilates instructor Namrata Purohit. It is a well-known fact that Malaika is a fitness enthusiast and frequently shares posts about her fitness regime on social media. Only last month, Malaika participated in the Hum Fit Toh India Fit fitness challenge, which gained massive popularity among Bollywood celebrities. The actress shared a video of herself doing Pilates.

In case you missed it, check out the video here.

Malaika Arora is best known for her dance numbers in films such as Dil Se, Housefull 2 and Dabangg among others. She was last seen as a judge and host in the television reality show India's Next Top Model Season 3.