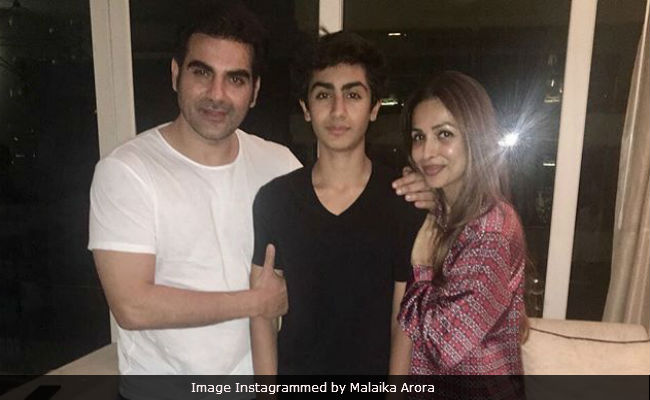 New Delhi: Malaika Arora and Arbaaz Khan are divorced but they continue to be in touch and are often spotted at family parties and outings, pretty often. It is Malaika and Arbaaz's son Arhaan's 15th birthday, which the former couple celebrated together yesterday. Malaika and Arbaaz celebrated Arhaan's birthday in the most adorable manner. In one of the pictures posted by Malaika, Arhaan can be seen sandwiched between his parents while in the other Arbaaz and Arhaan posed for a perfect father-son picture. Sharing some other beautiful pictures Malaika wrote: "My baby is a big boy now. Happy birthday my jaan. Love you to the moon and back my Arhaan #15today."

Take a look at Arhaan's birthday celebrations with mommy and daddy here:

My baby is a big boy now.happy bday my jaan.love u to the moon n back my arhaan #15today

Malaika and Arbaaz announced last year that they were separating and were granted a divorce this year in May. But, the former couple are still spotted together at social events.

Not only this year but last year also Malaika celebrated Arhaan's birthday with family. The entire Khan-daan, minus superstar Salman Khan, was in attendance as Arhaan blew 14 candles.

Malaika's sister Amrita Arora had shared pictures from the party:

Malaika was spotted at one end of the table while Arbaaz posed with Arhaan and Sohail's son Nirvaan:

In Malaika's first in-depth interview since divorcing Arbaaz, Malaika spoke candidly to mid-day about how the former couple are still a family unit and why personal equations between Arbaaz and her folks remain unchanged. Malaika told mid-day, "Arbaaz is a part of my family, the father of my child. Certain equations don't change overnight. The things that happened should remain between us. It's personal. We don't have to prove anything to anybody. Meeting (Arbaaz Khan) makes my son happy, and that makes me happy."

Promoted
Listen to the latest songs, only on JioSaavn.com
On the work front, Malaika, who recently celebrated her 44rth birthday, is currently seen as one of the judges on India's Next Top Model Season 3 while Arbaaz Khan will soon be seen romancing Sunny Leone in his upcoming film Tera Intezaar.