Mahesh Bhatt Loses His Cool At Event; Uncomfortable Alia Bhatt Says 'This Was Going To Happen'

"I warned you that this was gonna happen," a visibly uncomfortable Alia Bhatt said into the mic 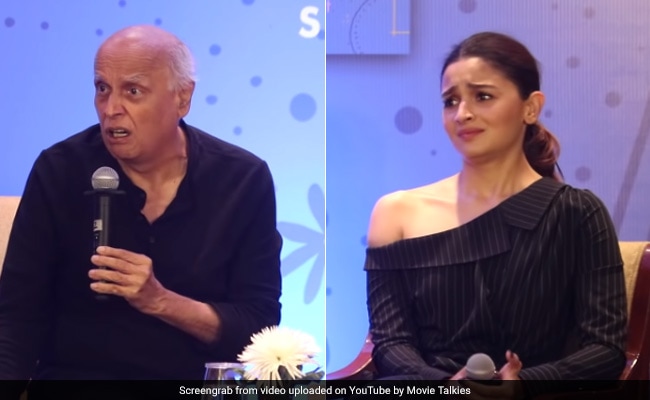 Filmmaker Mahesh Bhatt lost his cool when a reporter asked him: "So, you don't really want answers?" during a discussion about mental health and depression at the book launch event of Alia Bhatt's sister Shaheen Bhatt recently. Mahesh Bhatt was talking about the importance of a good listener and that "there are no answers" when one is going through depression at the book launch when he added that Shaheen would simply call up a friend and cry when she was battling depression and not "look for answers" as such. Just then a reporter appeared to reiterate something Mahesh Bhatt had said before by saying: "So you don't really want answers", which triggered the filmmaker as a very animated Mahesh Bhatt yelled out: "There are no answers! There are pretenders who claim to have answers and they institutionalise those answers and they impose those answers with the butt-end of a gun."

"Papa!" Shaheen was heard saying as she tried to calm Mahesh Bhatt down but he continued adding to his point. Soni Razdan, sitting just next to Mahesh Bhatt, also tried to calm down. "I warned you that this was gonna happen," a visibly uncomfortable Alia said into the mic as Mahesh Bhatt went on to say: "I have never pretended to my children that I was in possession of the virtues that people flaunt. That's why they feel they are not misfits with me. I am a misfit at 71."

Shaheen Bhatt talks about dealing with mental health issues and anxiety in her book I've Never Been (Un)Happier.

Alia and Shaheen are Mahesh Bhatt's daughters with actress Soni Razdan. Pooja Bhatt was born to Mahesh Bhatt and his first wife Kiran Bhatt. Last year, Shaheen Bhatt revealed she's been "suicidal" as a teenager. In an Instagram post in 2016, she had said: "I've lived with depression on and off since I was about 13 years old. This is not a revelation or a confession. Those who know me know this about me. It's not something I take any pains to hide, I'm not ashamed of it or particularly troubled by it. It's just a part of who I am."