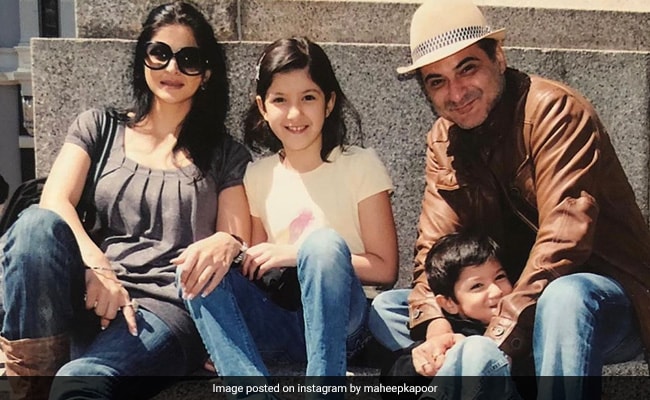 Our Tuesday just got better, thanks to Maheep Kapoor's throwback picture. She treated the us to an old picture of herself also featuring her husband Sanjay Kapoor, daughter Shanaya and son Jahaan. Maheep often delights her Insta-fam with throwback pictures. She shared the adorable family photograph on Instagram with a heart emoji and it is a perfect family portrait. Shanaya's cousin Mohit Marwah commented on her aunt's picture and wrote, "Where was this taken ?" to which Maheep replied "New Zealand." In the photograph, Maheep can be seen happily posing for the camera as she was sitting along with Shanaya. Her daughter's innocent smile has our heart. Maheep and Sanjay Kapoor's son Jahaan has a mischievous look on his face. Here's the picture we are talking about:

On Sridevi's 2nd death anniversary on Monday, Maheep Kapoor paid a tribute to her sister-in-law and shared a set of multiple pictures of herself with Sridevi.

Earlier, she had shared a couple of pictures of herself holding Shanaya when she was a baby and it is absolutely adorable.

How can we forget the picture that Maheep shared, which featured Gauri Khan and her daughter Suhana Khan, Ananya Panday with her mother Bhavana Panday and Shanaya Kapoor with her mother.

Another mesmerising picture had Gauri with Suhana, Maheep with Shanaya, and Sohail Khan's wife Seema Khan.

Maheep Kapoor got married to Sanjay Kapoor in the year 1997. They welcomed Shanaya in 1999 and Jahaan in 2005. Sanjay Kapoor made his acting debut in Bollywood with 1995 film Prem. He has also featured in several movies including 1999 film Sirf Tum, 2002's Soch, 2003's Darna Mana Hai among others. He has also produced films like Kya Time Hai Yaar and Tevar.