Madhuri Dixit's Son Ryan Donates Hair To Cancer Patients. "It Took Him Almost 2 Years To Grow The Required Length Of Hair," She Writes

"Not all heroes wear capes..... But mine did," Madhuri Dixit proudly wrote in the caption 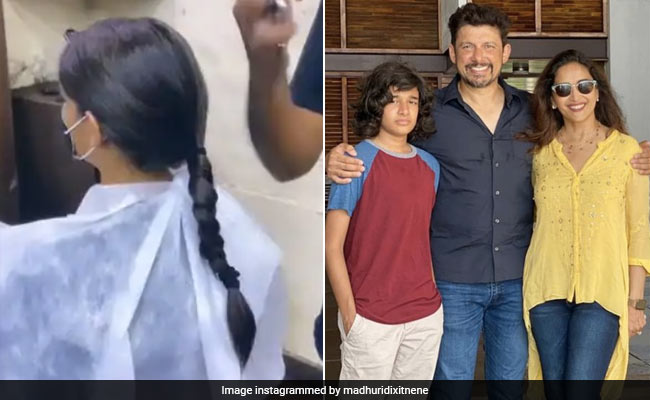 Madhuri Dixit and Shriram Nene's younger son Ryan has been garnering praise on the Internet for donating hair to cancer society on National Cancer Awareness Day (observed on November 7). "Proud" parent Madhuri Dixit shared a video of Ryan getting a haircut at a salon and stated how he decided to donate his hair to cancer patients. She also shared that it took Ryan almost two years "to grow the required length of hair" and getting it cut for the cancer society was the "final step." In her post, Madhuri Dixit wrote: "Not all heroes wear capes... But mine did. On the occasion of National Cancer Day, I would like to share something really special. Ryan felt heartbroken seeing several folks who were undergoing chemo for cancer. With everything they go through, they lose their hair. My son took a call of donating his hair to the Cancer Society. We as parents were thrilled with his decision."

The actress added: "As per guidelines, it took him almost 2 years to grow the required length of hair. And this was the final step. Here we are today standing proud."

Madhuri Dixit's friends and fans hailed Ryan for being committed to the noble cause of helping cancer patients. "Such a beautiful thought...Bless him," wrote Shilpa Shetty in the comments section while filmmaker and choreographer Farah Khan commented: "How extremely sensitive and kind."

A user commented: "Great thought and contribution... all the best for future Ryan" while another wrote: "Proud of your son and congratulations for good parenting." A comment by another fan read: "We all are proud."