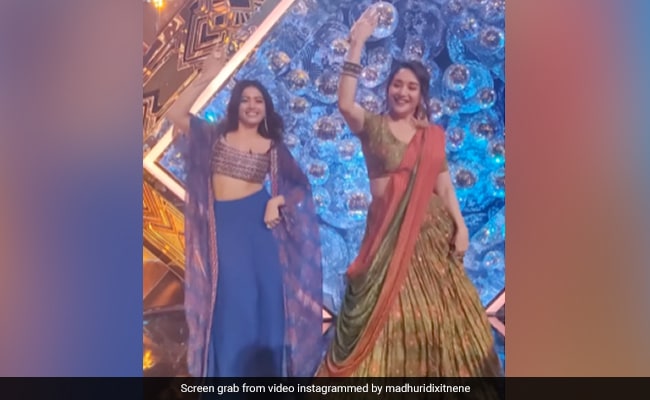 It's never a dull moment with Madhuri Dixit around and Rashmika Mandanna knows it very well. The 26-year-old actress, who is on a promotional spree for her upcoming film Goodbye, recently appeared on the dance reality show Jhalak Dikhhla Jaa 10. Madhuri Dixit, who is one of the judges on the show, along with Karan Johar and Nora Fatehi, made sure that the Pushpa actress had a blast. Madhuri Dixit has also posted a video of herself and Rashmika grooving to the beats of Boom Padi from her upcoming film Maja Ma. Sharing the clip, Madhuri Dixit wrote, “Maja Ma with Rashmika Mandanna.” The actress also added hashtags for her films like, “#MajaMaOnPrime #jhalakdikhlajaa #BoomPadi and #BoomPadiWithMadhuri.”

Boom Padi, the “Garba anthem of the year”, was dropped on September 15. Check it out here:

Rashmika Mandanna has also posted a set of pictures and wrote, “A lil bit of flow and a lil bit of sass. Goodbye.”

About Madhuri Dixit's upcoming film, Maja Ma is a family entertainer directed by Anand Tiwari. The movie will also feature Gajraj Rao, Barkha Singh, Sheeba Chaddha and Srishti Srivastava.
The trailer of Maja Ma promises family drama and a whole lot of fun. It was shared by Madhuri Dixit last week. She summed up the film with these words, “A wedding, a secret and two families that are poles apart! could this festive season get any better? Trailer out now! Watch Maja Ma on Prime, October 6.”

Maja Ma will premiere on Prime Video on October 6.

Meanwhile, Rashmika Mandanna's Goodbye will hit the theatres on October 7. Amitabh Bachchan and Neena Gupta are also part of the movie.