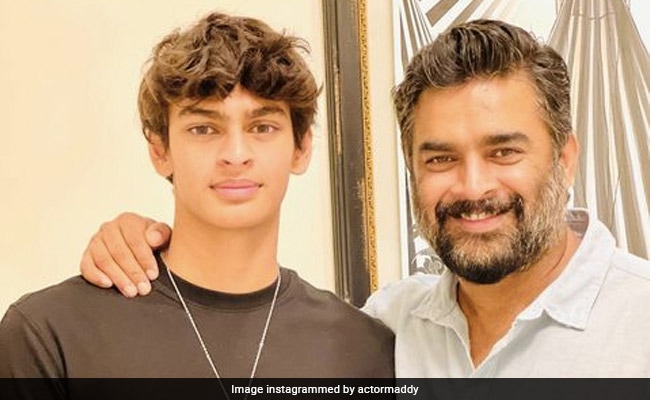 Actor R Madhavan is on cloud nine as his son Vedaant Madhavan has bagged a gold medal in swimming at the Danish Open 2022. Vedaant won the medal in the 800m swimming event and clocked 8:17.28. The 3 Idiots actor shared a clip wherein Vedaant's name is being announced during the felicitation ceremony. Sharing  the clip on his Instagram handle, he wrote, "GOLD....With all your blessings and God's greatest the winning street continues.Today it's a GOLD IN 800m for vedaantmadhavan. Overwhelmed and humbled." In the post, he also thanked Vedaant's coach, swimming federation and the entire team.

Soon after R Madhavan shared the post, his industry friends and fans flooded the comment section. Shilpa Shirodhkar wrote, "Absolutely amazing Maddy a proud moment for all of us. Congratulations my dear vedaantmadhavan sending u loads of love and blessings my dear...". While his fans wrote, "Congratulations".

On Saturday, R Madhavan's son bagged a silver medal at the same swimming event, but in a different category. He won the medal in the 1500m freestyle swimming event and clocked at 15:57:86. Sharing the clip, the actor wrote, "vedaantmadhavan wins Silver for India at the Danish Open in Copenhagen. Thank you so much Pradeep sir, #swimmingfederationofindia and #ansadxb for all your efforts. We are so proud."

R Madhavan's son Vedaant has represented India at several international swimming competitions. From bronze to gold, he has won many awards in different categories.

Talking about R Madhavan, he will be next seen in Rocketry: The Nambi Effect, based on the life of former Indian Space Research Organisation (ISRO) scientist Nambi Narayanan. With this film, Madhavan will mark his directorial debut as he has written the film. The film is scheduled to hit the theatres on July 1, 2022.