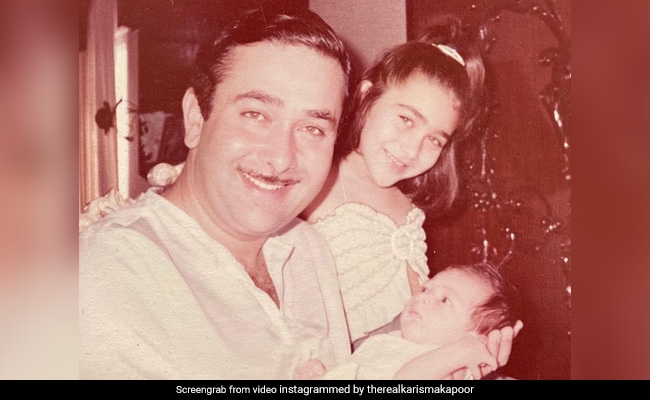 Karisma Kapoor's happiness knows no bounds - her sister, actress Kareena Kapoor, welcomed a baby boy on Sunday. Karisma shared the joy of becoming a "maasi again" on Instagram by posting a million-dollar throwback picture of Kareena Kapoor from when she was a little baby. The blast from the past features Randhir Kapoor holding newborn daughter, Kareena, in his arms with pint-sized Karisma Kapoor sitting next to him and happily posing for the camera. Sharing the photo, Karisma Kapoor wrote: "That's my sis when she was a newborn and now she's a mama once again! And I'm a maasi again, so excited." Kareena Kapoor and Saif Ali Khan are also parents to four-year-old Taimur.

Kareena Kapoor welcomed her second baby at Mumbai's Breach Candy Hospital around 9 am on Sunday. Veteran actor Randhir Kapoor had, earlier in the day, told news agency PTI: "She has delivered a baby boy in the morning around 9 am. I'll be visiting them soon."

Last year, a few months after Kareena Kapoor and Saif Ali Khan announced their second pregnancy, Karisma posted a boomerang that featured her getting ready for a shoot with her pregnant sister. "Working with the sis always the best," she captioned it.

Karisma Kapoor was last seen in the ALT Balaji and ZEE5 web series Mentalhood where she shared screen space with Sanjay Suri, Sandhya Mridul, Shilpa Shukla and Shruti Seth. Her last Hindi film remains Dangerous Ishhq, after which she featured in special roles in films such as Bombay Talkies and Zero.