"It wasn't awkward while shooting and we are professionals, we knew we are doing our job," said Kiara Advani 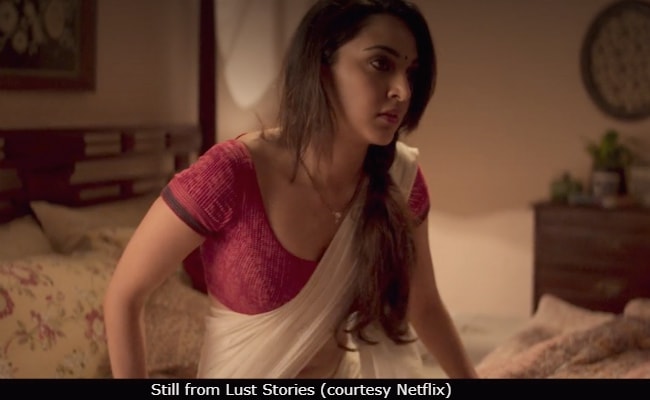 Kiara Advani in a still from Lust Stories (courtesy YouTube)

So, much hullabaloo has happened over the masturbation scene featuring Kiara Advani in Lust Stories but that does not take away from the fact that the Karan Johar-directed short story in the anthology was cent per cent entertaining. In a recent interview with PTI, Kiara reveals the pep-talk she received from the 46-year-old filmmaker before she filmed the sequence. "We stayed true to the script. It has come out the way it was written. It wasn't awkward while shooting and we are professionals, we knew we are doing our job. "Karan said 'Don't try to do it in a funny way, try to play it in a realistic way. It is an awkward situation in the film and I am trying to cover up what has happened.' The reality in the scene ends up looking funny," PTI quoted the actress as saying. Kiara Advani co-stars with Vicky Kaushal in the movie.

Spoiler Alert! Those who haven't watched the Netflix original film, tread cautiously. The particular sequence in concern has the title song of Kabhi Khushi Kabhie Gham... playing in the voice of Lata Mangeshkar during the particular sequence in concern - something which has reportedly upset the legendary singer's family, a representative told Bollywood Hungama. Lata Mangeshkar is also apparently unaware of the implementation of her song in Lust Stories. "I still remember how ecstatic Karan was when Didi had recorded the song for Kabhi Khushi Kabhie Gham.... He said it was a dream come true. Why turn the dream song into a nightmare now?" Bollywood Hungama quoted the source as saying. 2001's Kabhi Khushi Kabhie Gham... was Karan Johar's second movie as a director.

Now, talking about the relevance of opening up about women sexuality on screen, Kiara told PTI: "I feel now it is becoming normal and natural and people are talking about it, eventually they will think, why make a big deal of it? It will take time. Not every person is going to be ok. For instance, kissing scenes were considered a huge deal but not today." Kiara Advani plays the role of a newly-married woman in Lust Stories, who appeared to be unhappy with her sexual life and wanted to take control of it through alternate means.

"Everybody is aware and exposed to and is educated enough. As long as nothing is out of context then it is fine to show it in films. It is good that everything is being shown instead of forcefully trying to hide it. At the end of the day, lust is a by-product of love," Kiara added.