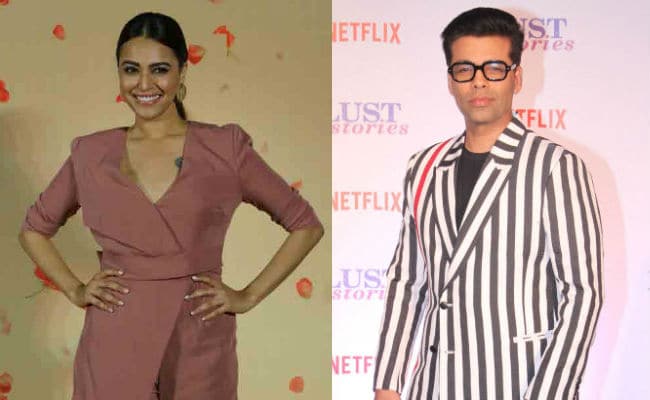 Swara Bhasker and Karan Johar at different events in Mumbai

Q: After Bombay Talkies (2013), how did the concept of Lust Stories come around and how does a project like this take shape?

Karan Johar: "It worked out just like Bombay Talkies. It's Ashi Dua's concept, she came to us with the idea, and we got on board. The budget remained the same. We all stuck to the budget - that's an unsaid rule. We are given an amount to make this film. I also stuck to the budget like a good student. We were thinking of various themes to integrate into four stories and give it to the common theme. We came down to Love & Lust, which then further came down to Lust Stories. Each story has an interpretation of lust. We just thought it should be four different voices but one collaborative emotion."

Karan Johar: "We didn't do this to sensationalise, that was not the idea. There is a lot of care in the way sensitivities are protected, and the sensibilities are all there. We are not trying to be sensational for the sake of it. There is no out there scene of nudity or profanity. Whatever is there is there for a reason and purpose, and all we expect is a viewership, we seek eyeballs and a lot of love for our lust."

Q: Do you read all the blogs and tweets and everything that's written on the internet about things like these?

Karan Johar: "I read everything. I stick to what I said, at least people are talking about it."

Q: What's different when you are working on a film that will stream only on the web and not in a cinema?

Karan Johar: "We all watch web shows, and we are all engaged in web series that are made across the world, but this was a different experience because this is a short film for us. Writing a short is empowering in so many ways. I haven't cracked the code; I approach my short film as a feature. I have got the syntax of the writing a feature film which has a beginning and interval and an end. My biggest limitation for a short film writer is that I haven't been able to crack that."

Q: Is the pressure less because it's on the web?

Karan Johar: "We are always under pressure. Yes, for a film it's different. It's stressful. There is money from the market, then add to that marketing and publicity money. You are always thinking that people should not lose money. The thought that how many people will come is always on your mind. What will be the weekend numbers? Will they go up on Saturday and again on Monday? These are traumatic emotions we go through. For someone of us who are connected to the box-office DNA, it's even more traumatizing. I am too aware. Thankfully here we had had very limited budgets. Isn't it sad that I get so much money for love and so little for lust?"

Q: All the four films in Lust Stories have a female protagonist, was that a part of the brief?

Karan Johar: "No! That was not a diktat at all. It just worked out this way naturally. Even we found this out later about each other's films."

Q: At what point do all four directors watch each other's films?

Promoted
Listen to the latest songs, only on JioSaavn.com
Karan Johar: "That's the fun part. We make our films then one day we go to Zoya's house and sit on her sofa and watch all four movies back to back. She feeds us kababs, and we chat about each film. My heart is in my mouth because you are seeking validation of the contemporaries who you love and respect. And when you are there, you just hope that you are a correct part of the narrative."