"We were chatting this afternoon. He is on his farm with his family," Nafisa Ali tweeted on Tuesday 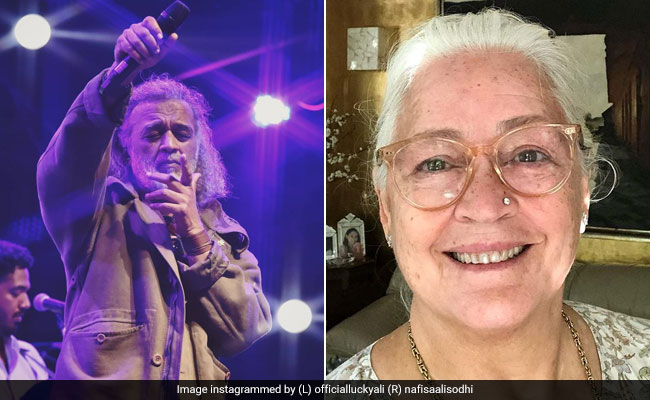 If you came across the news of singer Lucky Ali's death on Twitter last night, fret not, it is fake. On Tuesday, Lucky Ali's close friend Nafisa Ali quashed the rumour of his death on the micro-blogging platform saying that he is fine and not COVID positive. Sharing the health update of the singer, she wrote, "Lucky is totally well and we were chatting this afternoon. He is on his farm with his family. No Covid. In good health." Nafisa had replied to a Twitter user who posted condolences for Lucky Ali on the platform. "He will be always remembered for his unique hmmm voice #LuckyAli #Covid," the tweet of the user read.

Lucky is totally well and we were chatting this afternoon. He is on his farm with his family . No Covid . In good health.

Nafisa also spoke to Economic Times about Lucky Ali's health in which she confirmed that he is alive. The actress informed that the singer is currently staying with his family at his farmhouse in Bengaluru. He is busy planning his virtual concerts.

Confirming about his health, she told the website, "I chatted with Lucky Ali 2-3 times today. He is fine. He does not have COVID. In fact, he has antibodies. He is busy planning his music and concerts. We were talking about virtual concerts happening and all such things. He is on his farm in Bengaluru and his family is there with him. I just spoke to him, everybody is fine."

On Tuesday evening, news of Lucky Ali's death went viral and was among the list of top trends on Twitter. The micro-blogging platform was flooded with condolences messages for Lucky Ali. "Miss you Lucky saab #luckyali," a tweet read. "Oh no, this can't be true! No way #luckyali," a worried Twitter user wrote. "#RIP #luckyali .. he was one of a gem," another tweet read. However, the news turned out to be fake.

In December 2020, a video went viral on social media in which we saw Lucky Ali singing in an impromptu gig in Goa. In the video, the 62-year-old singer, surrounded by his fans, can be seen singing his 90s popular song O Sanam and playing guitar. Lucky Ali's close friend Nafisa Ali had shared the clip on her Instagram handle back then. She wrote, "Lucky Ali live and impromptu at Arambol. At Garden of Dreams."

We are talking about this clip:

Months later, Nafisa informed everyone that Lucky Ali is composing and recording a song for her. In March this year, the actress posted Lucky Ali's picture on Instagram and wrote, "I am so ecstatic as my friend Lucky Ali is producing, composing and recording a song specially for me. Lucky has the voice that touches hearts. Wish us luck and thank you to director and producer Arjun Nirula for agreeing make this into a music video. Will keep you posted and wish us all blessings (please) to harmonise the soulful music of our legendary 'Ali.'"

In November 2020, Lucky Ali had posted a video of himself in which he can be seen singing the unplugged version of O Sanam. His video went massively viral on social media back then.