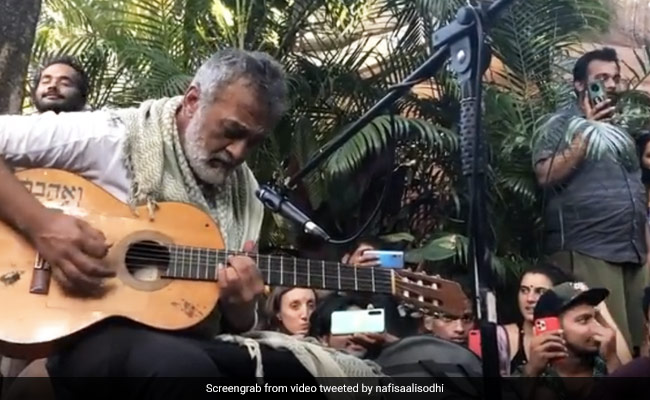 Lucky Ali in a still from the video. (courtesy: nafisaalisodhi)

All the Lucky Ali fans out there are in for a treat. The singer, who has given us gems like O Sanam and Gori Teri Aankhain, among many others, held the Internet's attention once again and for all the right reasons. The 62-year-old singer surprised his fans in Goa with an impromptu gig, which the Internet can't get enough of. The video of Lucky Ali's gig was shared by veteran actress Nafisa Ali Sodhi. Sharing the video on her Instagram profile, the actress simply captioned the post: "Lucky Ali live and impromptu at Arambol. At Garden of Dreams." In the viral video, Lucky Ali  can be seen playing the guitar while he sings the Nineties' popular song O Sanam as the audience sways to the soulful track.

Just like us, fans of the singer couldn't thank Nafisa Ali Sodhi enough for sharing the video. "A flood of memories just in the first few seconds. A gem! Thank you for sharing," wrote Chennai Express actor Nikitin Dheer. "The audience is so lucky that they got to witness such an intimate performance," commented a fan. "Lucky person who is sitting around," added another fan. Another comment read, "What true "unplugged" is supposed to be."

Lucky Ali's singles were a hit in the Nineties and resonate with today's generation as well. He debuted as a Bollywood singer in 2000 with Kaho Naa... Pyaar Hai song Na Tum Jaano Na Hum. He also acted in the 2002 film Sur - The Melody of Life. In 2010's Anjana Anjani, he sung Hairat. Lucky Ali also sang the track Safarnama, from Deepika Padukone and Ranbir Kapoor's 2015 film Tamasha.