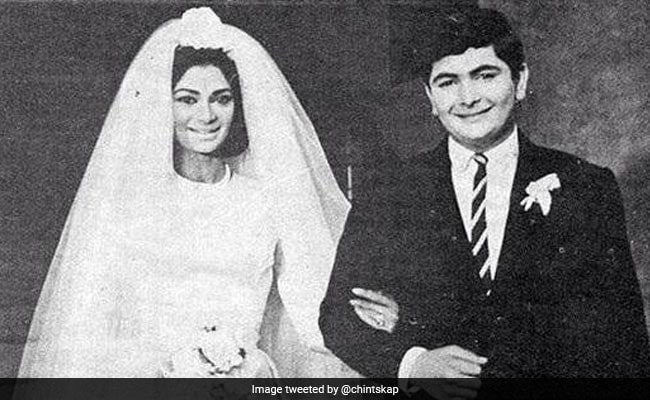 New Delhi: Mera Naam Joker clocked 47 years on Monday and that's when Rishi Kapoor chanced upon a priceless photo from the sets of his debut movie - he was just 18 then and his co-star Simi Garewal was 23. Directed by Rishi Kapoor's father Raj Kapoor, Mera Naam Joker was the Bobby actor's first movie with a fully-etched role. Raj Kapoor also acted in and produced the iconic drama - while he played the grown up version of the protagonist, circus clown Raju, Rishi Kapoor featured as the young Raju. Simi Garewal played the role of Raju's teacher Mary, who was the subject of Raju's adolescent infatuation. In the movie, Raju never manages to convey his feelings to Mary and ends up attending her wedding.

The blast from the past shared by Rishi Kapoor is from the reel-wedding but a heartbroken Raju did not appear as happy in the movie as Rishi Kapoor looks in the monochrome photograph.

Back in 1970, Mera Naam Joker took the cine-goers by somewhat of a surprise because of the still-discussed scene, in which Mary undresses after a swim and is secretly admired by a young Raju. The movie also made headlines for its subject line - the life of a circus clown. Raj Kapoor won the Filmfare Best Director Award for Mera Naam Joker, which also featured names like Dharmendra, Manoj Kumar and Padmini.

Promoted
Listen to the latest songs, only on JioSaavn.com
A young Rishi Kapoor made his first appearance in Bollywood in the signature Raj Kapoor song Pyar Hua Iqrar Hua from Shree 420 (1955), also directed by the senior Kapoor. Rishi Kapoor was also directed by his father in 1973's Bobby.

Rishi Kapoor is 65 now. Last seen in Kapoor And Sons, the actor is busy with the production of 102 Not Out, in which he co-stars with Amitabh Bachchan.