"The troubles the set has faced is another film all together," wrote Alia Bhatt 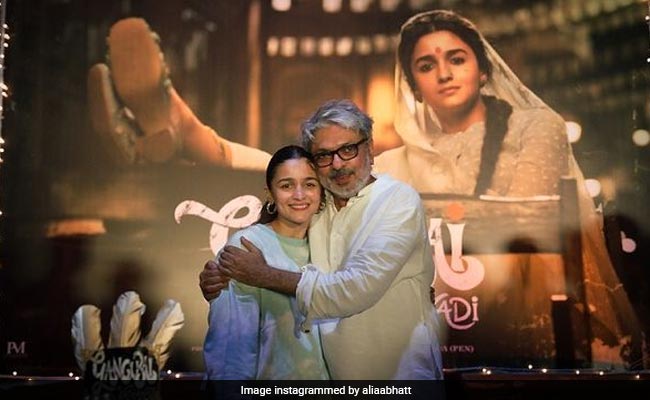 Alia Bhatt and Sanjay Leela Bhansali wrapped up Gangubai Kathiawadi after two long years. The actress shared a few pictures with the film's director and the crew of the film and summed up her experience of working on the project. Alia wrote in her post that shooting for the film was not easy what with two lockdowns, two cyclones, and both the film's lead actor as well as the director contracting the virus. "We started shooting Gangubai on the 8th of December 2019... And we wrapped the film now 2 years later! This film and set has been through two lockdowns...Two cyclones. Director and actor getting COVID during the making! The troubles the set has faced is another film all together," wrote Alia Bhatt in her post.

Despite the obstacles, Alia Bhatt's "take away" from the film was "the gigantic life changing experience." Speaking of her experience of working with Sanjay Leela Bhansali for the first time, Alia Bhatt wrote: "Being directed by Sir has been a dream all my life, but I don't think anything would have prepared me for the journey I was on for these two years... I walk out of this set a diff person today! I love you sir! Thank you for being you... There is truly no one like you."

The 28-year-old actress signed off the post with these words: "When a film ends a part of you ends with it! Today I've lost a part of me... Gangu I love you! You will be missed. PS_ A special mention to my crew - my family and friends for these two years! Without you nothing would have been possible! Love you guys."

Gangubai Kathiawadi showcases the story of mafia queen Gangubai Kathiawadi and it will be Alia's first project with Sanjay Leela Bhansali. The actress was supposed to work with the filmmaker in a film titled Inshallah, co-starring Salman Khan. However, it got shelved. The film also stars Ajay Devgn, who previously worked with Sanjay Leela Bhansali in Hum Dil De Chuke Sanam.

Gangubai Kathiawadi was earlier slated to release on September 11, 2020. However, the film's shooting and production was halted due to the pandemic and the nationwide lockdown last year. The release date was later shifted to July 30 and it was to clash with Prabhas' Radhe Shyam. This year too, the film's shooting was stopped temporarily due to the lockdown in Maharashtra. The film's revised release date has not been announced as of now.