Liger Review: The lead actor is saddled with scenes in which the other actors are required to holler at the top of their voices to make up for the monosyllables that the hero utters with difficulty. 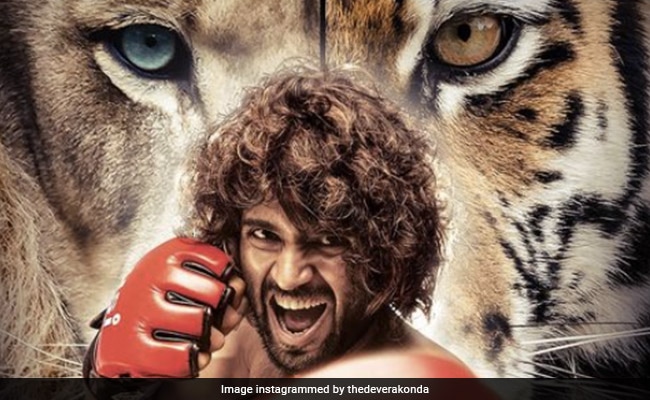 The much-hyped Liger, Vijay Deverakonda's Hindi debut, is full of surprises. But these are strictly of the kind that the film and the Arjun Reddy star could have done without.

The action gets underway with the bar set so low that one is certain it cannot go any lower. But it does. That is the kind of movie Liger is. Terrible from the very outset, the only way it goes is down.

Deverakonda, having transformed himself physically, plays a kickboxer with a stutter who moves with his widowed mother from Telangana's Karimnagar to the metropolis of Mumbai with the aim of striking it rich as a mixed martial arts (MMA) fighter. His mother, Balamani (Ramya Krishnan), sells tea from a portable kiosk to make a living and enable her son, Liger, to pursue his passion.

The lead actor is saddled with spectacularly sloppy scenes in which the other actors are required to holler at the top of their voices to make up for the monosyllables that the pugnacious hero utters with a great degree of difficulty. Wonder what made the star think that Liger was the right film for him to launch his Hindi cinema career with. He puts in a great deal of effort, but the film is way too wobbly to get off the ground and soar.

This is a Hindi-Telugu bilingual written and directed by Puri Jagannadh, whose Puri Connects banner has bankrolled the film in collaboration with Karan Johar's Dharma Productions. No matter in which language one chooses to see it - or say it - Liger is absolutely unwatchable.

The film was aggressively promoted by its gung-ho lead actors, Deverakonda and Ananya Panday, over the past several weeks. What did the duo see in Liger that enthused them to crisscross the country to push the film with such enthusiasm?

Liger has nothing at all - story, emotional depth, convincing mixed martial arts action or genuine high drama - to commend itself. It is beyond mucky. There isn't a single scene in the ham-fisted film that would suggest that any thought went into its making.

Shoddily written, poorly acted and ineptly executed, Liger never comes close to launching itself into a full-blown roar. Even when it attempts to growl, all that it manages to let out is a dreary groan. The cinematic sense and storytelling dynamic on show here is severely stunted and lost amid a whole lot of scrappy action.

So shoddy is the screenplay that the MMA-themed drama pulls off the impossible feat of continuously producing one scene after another more mindless than the one before. Just when you begin to think that the film has discovered its level and will now run with it with some kind of consistency, it catches you by surprise. It devises means to sink even deeper into a quagmire of clumsiness in the very next sequence.

Liger centres on a young man who has a severe stammer but is in full flow when he is allowed to express himself with his fists of fury. 'Fighter' is the only word that he can utter without a stutter. He seems to be perfectly at ease with the condition, but the world around him does not let him come to terms with it. Somebody asks him: How come you look so good and sound so terrible?

The worst aspect of Liger isn't that it is big, bloated and unbearable, but the fact that it is both horribly sexist and outrageously insensitive towards the protagonist's speech impairment.

Liger believes that God made women to remind men that there is something out there called hell. He calls them dolls or devils and neither is meant as a term of endearment. People around him make fun of his stutter. Even his mother sees it as a flaw.

The lady tells her son that everyone in this world has flaws but if he manages to achieve his goal his speech will begin to sound like a song. To rub it in, the script, with utter disregard for common sense, has Balamani say that a short man would seem taller or a dark-skinned man would appear fairer if he were to make it in life in his chosen field of endeavour.

The hero is named Liger because his mother insists that she is a tigress and her dead husband, a celebrated MMA fighter who died in the ring, was a lion. She drills into the boy that it is for him to complete his father's unfulfilled dream of become the national champion.

Liger's mother pleads with a famed Jeet Kune Do trainer (Ronit Roy) to groom her son. Liger idolizes legendary MMA fighter Mark Anderson (Mike Tyson, in his first Indian movie, has an extended cameo that is cringe-inducing as everything else in Liger), whose portrait hangs on the wall of his modest home.

Tanya (Ananya Panday), the younger sister of a rival fighter Sanju (Vishu Reddy), falls in love with Liger, leading to all manner of complications involving the guy's mother and the girl's brother.

At some point in the second half, the action shifts to the US of A, where an Indian entrepreneur (Chunky Panday) adds to the film's already high silliness quotient.

Tyson pops up as the film begins to wind down and nothing that the former heavyweight champion of the world does can lend any heft to the film. If anything, he only drags it down all the way to the level of his own bootlaces.

Indeed, that is where Liger begins to hover by the time it has run its course. It is massive mess of a movie that Vijay Deverakonda's newfangled physique and action chops cannot salvage. As for the other actors in the cast, they ham their way through and compete to outshout each other.

Liger is a movie best avoided.

Delhi Crime 2 Review: Perceptive And Powerful Portrait Of City At War With Itself