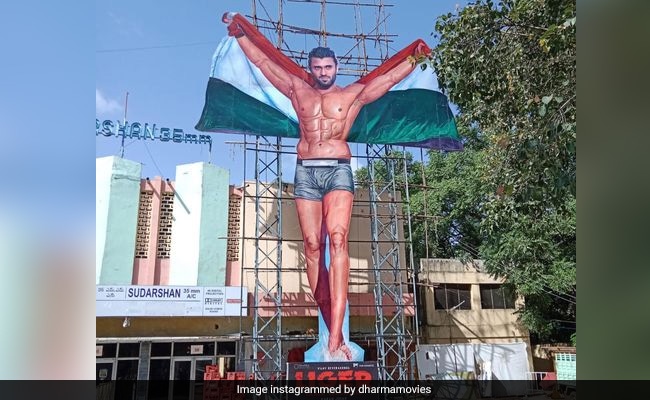 A pic of Vijay Deverakonda's cut-out at a theatre. (courtesy: dharmamovies)

Vijay Deverakonda and Ananya Panday's much-awaited forthcoming film Liger is going to release next month. But before that, the trailer of the film will drop tomorrow and adding to the hype, a 75 feet cut-out of Vijay Deverakonda has been installed outside Sudarshan theatre in Hyderabad. The cut-out features Vijay in boxer gloves and raising the national flag. The makers at Dharma Productions shared a glimpse of it on Instagram. The caption read: "Now this is what you call a MASSive cutout that is set to pack a punch! Catch the 75ft. LIGER cutout at Sudarshan 35MM theatre, Hyderabad. The grand Liger Trailer launch event is happening TOMORROW, 9:30AM onwards."

As the trailer will launch at 9:30 am on Thursday, the grand event is taking place in Hyderabad and Mumbai. Liger brings together Vijay and Ananya for the first time. The film also has a cameo appearance by American professional boxer Mike Tyson. Just yesterday, Vijay shared a new poster from the film to announce the trailer launch. In a shirt, pants and unkempt hair, Vijay is surrounded by all kinds of weapons in the poster. He captioned it: "In 3 Days.HAVOC," with the hashtags #Liger and #LigerTrailerOnJuly21.

The first song, titled Akdi Padki, a high-energy track was released last week. The dance number was well-received by the audience with more than 25 million views on YouTube.

Liger releases August 25. It has been directed by Puri Jagannadh, known for helming films like iSmart Shankar, Pokiri and Loafer.