Read inOther Languages
This Article is From Jan 28, 2020 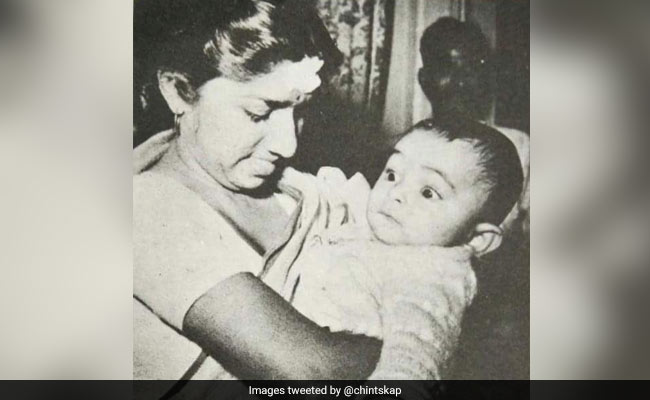 When Rishi Kapoor is not busy shooting for films, the actor keeps his fans on Twitter engaged by sharing throwback pictures from his enviable collection of photographs, each with an interesting story to tell. On Tuesday, the 67-year-old actor posted a throwback picture which also features the legendary singer Lata Mangeshkar. In the picture, an infant Rishi Kapoor can be seen curled up in Lata Mangeshkar's arms. Rishi Kapoor, in his tweet, recalled that that the picture happens to be from the time when he was nearly one or two-months old. Rishi Kapoor stated that the picture is extremely precious to him and thanked Lata Mangeshkar for showering her blessings on him always.

Rishi Kapoor tweeted, "Namaste Lata ji! Aapke aashirwad se mujhe apni do ya teen mahine wali picture mil gayi. Sada apka aashirwad raha hai mujh par. Bahut, bahut dhanyawad. Kya main duniya ko bata sakta hun ye picture Twitter pe daal ke? Ek beshkeemti picture hai mere liye." (Through your blessings, I chanced upon this picture from the time when I was 1 or 2-months-old. You blessings have always been with me. Thank you so much. Can I tell that to the world by sharing this picture on Twitter? This picture is priceless for me).

Lata Mangeshkar returned home in December last year, after being admitted at Mumbai's Breach Candy Hospital for almost a month. The 90-year-old singer was admitted to the Mumbai hospital's intensive care unit in November, after she complained of difficulty in breathing.

Rishi Kapoor returned to Mumbai in September 2019 after almost a year of cancer treatment in New York. On the professional front, he was last seen in the thriller The Body, co-starring Emraan Hashmi, Sobhita Dhulipala and Vedhika. The actor has also signed the Hindi remake of the 2015 film The Intern, co-starring Deepika Padukone. The original film featured Robert De Niro and Anne Hathaway in the lead roles.