Kunal Kemmu Wins The Bottle Cap Challenge. Everyone Else Can Go Home, Thanks 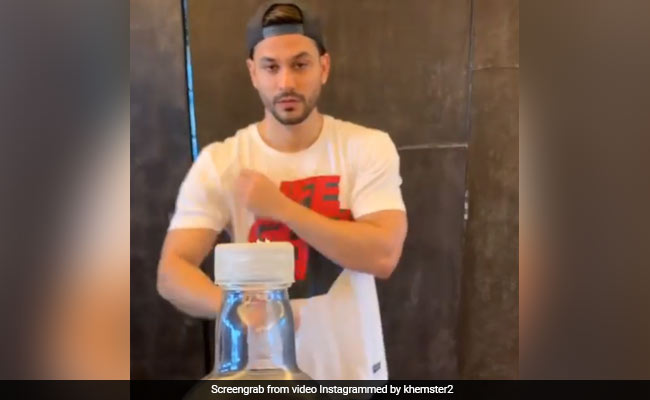 Kunal Kemmu in a still from his Instagram video (courtesy khemster2)

Let's take a moment to appreciate actor Kunal Kemmu's ROFl spin on the Bottle Cap Challenge, which is the latest viral challenge on the Internet. On Thursday, the Kalank actor Instagrammed a video of his own version of the Bottle Cap Challenge, which begins with him flexing his muscles and folding his sleeves as prep session to take the challenge head on but ends with a hilarious twist. For those who don't know, the Bottle Cap Challenge requires you to unscrew a bottle lid simply with a flying kick while keeping the bottle intact in its place. Now, after all that flexing, Kunal Kemmu made the best use of his "opposable thumbs", opened the bottle and took a nice long sip of water. Yep, he did it!

"Stay hydrated and thank god for opposable thumbs," he tweeted. BRB. We are dying laughing. On Instagram, those who became a fan of Kunal Kemmu's modified version of the challenge include Rohit Shetty, Angad Bedi, Mandana Karimi and others.

Inspired by my action idol #JasonStatham, I will repost/retweet the Best I see, come on Guys and Girls get your Bottle out and your Legs in the Air, Let's Do This #FitIndia#WednesdayMotivationpic.twitter.com/RsDYDWhS5n

Within hours, Akshay Kumar's Housefull 4 co-star Riteish Deshmukh attempted to claim that it's actually him in the Akshay Kumar video. Nice try Riteish but we know the truth here. "I couldn't resist either! That's my Bottle Cap Challenge with an Akshay Kumar mask... beware he may claim it's him.... as a good friend I will allow him that much! My next challenge video is with a Tiger Shroff mask." Smooth.

I couldn't resist either!!!
That's my #bottlecapchallange with an @akshaykumar mask... beware he may claim it's him.... as a good friend I will allow him that much !!! My next challenge video is with a @iTIGERSHROFF mask... pic.twitter.com/gGb0Na56c7

Tiger Shroff, also a fitness enthusiast like Akshay Kumar, accepted the challenge head on and nailed it - he even blindfolded himself while doing it as inspired by martial arts expert and actor Donnie Yen. Impressed. "Well, since everybody's showing off... Looking good Riteish sir," Instagrammed Tiger.

Verdict: Kunal Kemmu wins the Bottle Cap Challenge, everyone else can go home.