Kunal Kemmu Spent His Monday Doing Chores. What About You?

The actor can be seen peeling vegetables in the latest photo 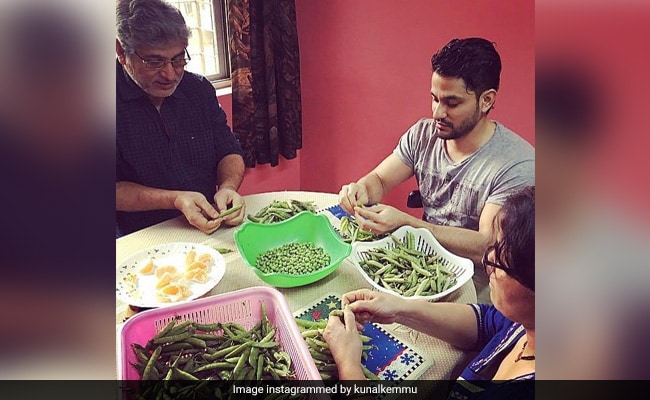 Actor Kunal Kemmu has always been a powerhouse performer on screen. But it seems like he is also the best person to have around at home when you need a helping hand at your daily chores. Need proof? Take a look at the latest photo that the actor has posted on Instagram. In the snap, Kunal can be seen peeling peas with his parents. The family also seem to be enjoying a plate of orange amid their task. Sharing the photo, Kunal  wrote, "Chores #HelpingHands #Monday." We are impressed, aren't you?

Fans also seemed to love seeing Kunal engaged in housework and expressed their appreciation by dropping heart emojis in the comment section. One fan even wrote, "A real account among so fake ones...These pictures show Kunal is so real."

The actor, on Sunday, also interacted with fans on Instagram by posting pictures that they requested. Followers got a look at an absolutely adorable photo of Kunal and his daughter, Inaaya. Kunal has previously treated us to many adorable pics with his daughter and wife, actress Soha Ali Khan. For instance, take a look at this picture of Kunal and Inaaya enjoying some time in the pool.

Reacting to this one, actress Anita Hasssanandani left a heart-eyed emoji.

In another photo, where Kunal is seen having a conversation with his daughter, he wrote, "It takes 2 to start a conversation. And the conversation can be about a million things... maybe even 2 million things. Stoked to see my Insta family grow. Thank you guys for all the love support criticism and motivation. Will keep doing what I do and will keep growing together. Lots of love."

Kunal was last seen in the comedy film Lootcase. The actor received positive reviews for his performance and also won the Dadasaheb Phalke International Film Festival award for Best Actor in Comedy for the role. The 37-year-old actor made a mark in films such as Kalank and the Golmaal series.