Well, it would have been pretty difficult to decipher the little one as Kriti Sanon without her help 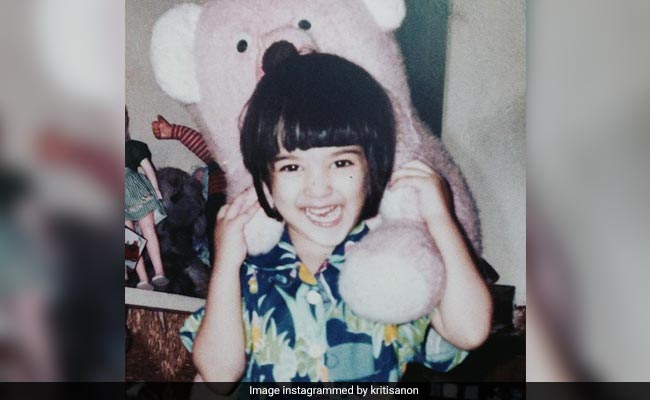 Kriti Sanon delighted us with an old photo of herself on Instagram as a Flashback Friday treat. "Who's that? Umm.. me!" she captioned the photo. The actress, who will celebrate her 28th birthday in July, is barely recognisable in the old photo, in which shows a much, much younger version of hers. The baby version of Kriti Sanon poses with a teddy bear in the photo and smiles ear-to-ear for the click. Well, it would have been pretty difficult to decipher the little one as Kriti Sanon without her help. Kriti Sanon's sister Nupur was one of the first ones to spot the photo on Instagram and commented: "Aww," which is basically what all of us after seeing the photo.

Meanwhile, Kriti's mother Geeta Sanon had the most mom-like reaction: "My cutie, my shonu monu... fir se chhoti ho ja. Kriti Sanon's Instafam also can't get over how adorably Kriti poses in the blast from the past.

We spot a throwback photo of Kriti Sanon on her Instagram every now and then. Here's what she posted as part of her Luka Chuppi promotions.

I guess i always liked playing a lil #LukaChuppi with the camera! Swipe left to see how things have changed (or rather haven't at all)

On the work front, Kriti Sanon was last seen in Luka Chuppi, co-starring Kartik Aaryan. Kriti recently spoke about actresses being side-lined while assigning due credit for a film's success after Luka Chuppi was described as "Kartik Aaryan's film" on several websites. The film has made over Rs 90 crore after it released a month ago.

Kriti Sanon also has films such as Housefull 4 and Arjun Patiala in the line-up. She will make a special appearance in the upcoming Kalank.