Kriti Sanon shared fitness video from the gym on her Instagram 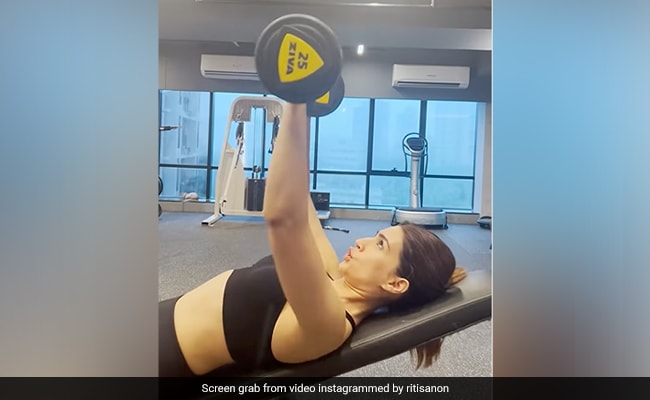 Kriti Sanon is passionate about fitness and this is evident from her social media updates. The actress often shares pictures and videos of her workout routines, inspiring millions of fans to adopt a healthy lifestyle. Now, on Tuesday, Kriti has set major fitness goals by dropping a video from the gym. In it, she is performing some complex exercise routines, ranging from push-ups to lifting weights. Sharing the post, Kriti said, “Beast Mode. Ready Set Tribe. At the new Juhu studio.” In the caption, Kriti is referring to The Tribe, the fitness studio that she co-founded earlier this year.

In May this year, Kriti Sanon made an announcement about The Tribe, her first project as an entrepreneur. Sharing the milestone, she said, “They say “Your Vibe Attracts Your Tribe”. I have always been someone who believes in pushing people I truly believe in and today stands for exactly that.”

Speaking about why she chose to invest in the fitness sector, Kriti Sanon said, “8 years ago, I started my journey as an actor in the Hindi film industry with the help of people who believed in me and gave me wings to fly. Today, 8 years later, exactly on the same day, I am thrilled to announce my journey as an entrepreneur with my three amazingly talented co-founders Anushka Nandani, Karan Sawhney and Robin Behl as we launch our Passion Project “The Tribe”.”

She added that it was after her career-defining role in Mimi that changed her outlook towards fitness. “I discovered my personal fitness journey post Mimi when I had to shed the 15 kilos I had put on for the film and we hit a lockdown where gyms were shut,” adding that her co-founders helped her during this period.

A few days ago, Kriti Sanon also dropped a video of her performing the plank exercise with two adorable cats resting on her back. In the caption, she said, “Meet Snatch and Clean. Treating my back as their personal plate. While Snatch seemed not so hungry, Clean was willing to balance her way to “clean” every last bit. It was a purry workout.”

On the work front, Kriti Sanon will be seen in Bhediya, Ganapath, Adipurush and Shehzada.