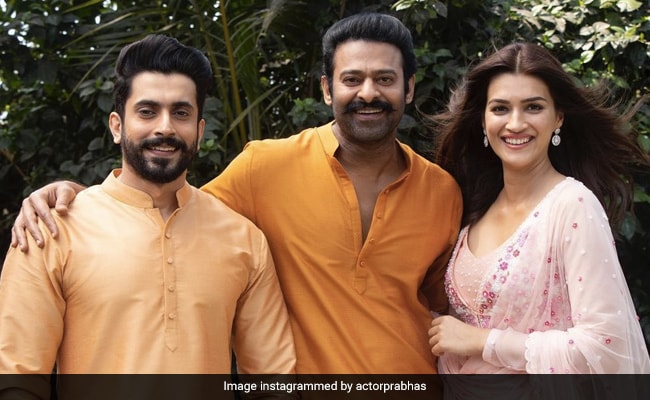 Actress Kriti Sanon and actor Sunny Singh have joined the cast of Om Raut's upcoming directorial venture Adipurush, South star Prabhas announced on Friday. Prabhas shared two photos with Kriti and Sunny on Instagram and welcomed both of them to the "Adipurush family". In the first picture, Prabhas can be seen posing with his co-stars Kriti Sanon and Sunny Singh. The second photo also features director Om Raut along with Prabhas, Kriti and Sunny. The Baahubali actor wrote in the caption, "Welcoming @kritisanon and @mesunnysingh to the #Adipurush family. See Prabhas's post here:

Sunny Singh, who became popular after Luv Ranjan's 2018 film Sonu Ke Titu Ki Sweety, shared the same pictures and wrote, "Joining the celebration of good over evil, excited to be a part of the #Adipurush family. See Sunny's post here:

In Adipurush, Prabhas will play the role of Lord Rama. It has been reported that Kriti Sanon is cast as Sita and Sunny Singh will play Lakshman in the upcoming mythological film. Saif Ali Khan, who is also a part of Adipurush, will play the role of antagonist demon Lankesh. While Saif Ali Khan has previously worked with Om Raut in Tanhaji: The Unsung Warrior (2020) , it will be the first collaboration of Prabhas, Kriti and Sunny with the director. Adipurush will hit the screens on August 11, 2022.

Adipurush will release in Hindi, Tamil, Telugu, Kannada and Malayalam in theatres. The film will be shot in Hindi and Telugu.