"Looking up, praying for treats and more holidays together," the actress wrote in the caption. 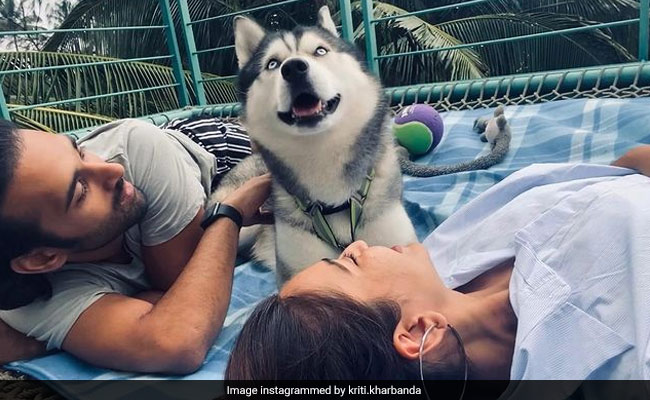 Actor Pulkit Samrat and his girlfriend, actress Kriti Kharbanda are busy celebrating Drogo's birthday. Wondering who we are talking about? Drogo is Pulkit Samrat's much-loved pet Siberian Husky. The dog is often seen on the actor's Instagram page and it has got its own Instagram handle by the name Drogo Husky. But Kriti Kharbanda has a nickname for it. "Chotu" seems to be on her mind. The actress' post today shows her and Pulkit Samrat on a rug while Drogo plays with them. "Looking up, praying for treats and more holidays together. Our cutie celebrates his birthday today. Happy birthday, Chotu." She also added red hearts and a hashtag, "blessed with the best" to her post. The comments were filled with heart and heart-eye emojis. Singer-composer Raghav Sachar commented, "He is a Leo too."

Pulkit Samrat also shared a video to celebrate the dog's presence in his life. The two are seen at the beach as they enjoy the tides lapping against them. "It's a happy morning. It's the birthday morning," Pulkit Samrat almost shouted out his words in the caption. Kriti Kharbanda's comment on his post read, "My most precious." She later shared the video on Stories. Among others, actress Genelia Deshmukh also left a comment saying, "Happy birthday, big boy."

Last month, Pulkit Samrat was seen taking a morning walk with his pet. The master keeps on the leash but lets the dog sniff out its way on the streets.

Here is another cute photo of the adorable pet that Pulkit Samrat shared on his Instagram. We are allowed to remain dazed by the dog's enigmatic gaze.

In this adorable snapshot, Pulkit Samrat hugs his pet and makes a surprised face to pose for the camera. He called them both, "The Bad Buoyz Club." The post received much love from his fans and followers.

Pulkit Samrat will be next seen in the third instalment of Fukrey. Kriti Kharbanda's latest project 14Phere just got released on Zee5.