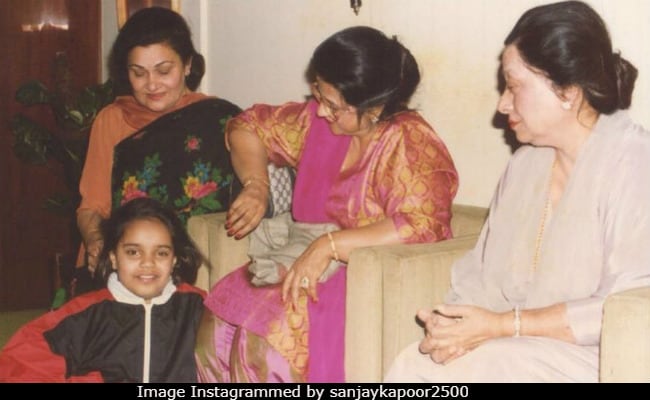 Sanjay Kapoor treated us to such a priceless photo on Thursday - because Thursday most definitely calls for some throwback memories. Sanjay Kapoor dug out an old photo from his archives, featuring Krishna Raj Kapoor and Nirmal Kapoor. Krishna Raj Kapoor is legendary actor Raj Kapoor's wife while Nirmal Kapoor is the mother of Sanjay, Anil and Boney Kapoor. In the photo, a much younger version of casting director Shanoo Sharma can be seen chilling with the senior Kapoors. Talking a dig at Shanoo Sharma, Sanjay Kapoor, known for his hilarious captions, wrote: "Major throwback, when Shanoo was trying to cast Krishna aunty and my mom. PS even then she was centre of attraction everyone's eyes on her."

Don't you think it's a million dollar throwback photo?

#majorthrowback , when Shanoo was trying to cast Krishna aunty and my mom PS even then she was Center of attraction everyone's eyes on her @shanoosharmarahihai

A quick trip to Sanjay Kapoor's Instagram will reveal that he indeed believes that old is gold. With a throwback photo from his own wedding, Sanjay jokingly trolled his nephew Arjun Kapoor, courtesy Arjun's priceless expression:

That's my expression when Arjun gets married #bored #getitoverwithchachu

During Sonam Kapoor's wedding, he dug out another one from his own wedding, featuring a much younger Sonam, and wrote: "20 years back when we danced at my wedding Sonam, now I will be dancing at yours."

Ahead of Sonam's wedding, Sanjay Kapoor gave a massive shout out to Sonam's mother Sunita Kapoor for making spectacular wedding arrangements with this throwback photo:

One women show , wat a spectacular wedding Sonu only u could have pulled it off in a month love u Sonam and ANAND you'll make the sweetest and coolest couple #sonamkishaadi

Harshvardhan Kapoor also featured in one of Sanjay Kapoor's throwback posts. "Watch the super talented Harshvardhan in Bhavesh Joshi, in theatres today," he Instagrammed on the day of Bhavesh Joshi's release.

Which one amongst these are your favourite from Sanjay Kapoor's Instagram? Tell us in the comments below.