Koffee With Karan 7: Here are the highlights from the rapid fire 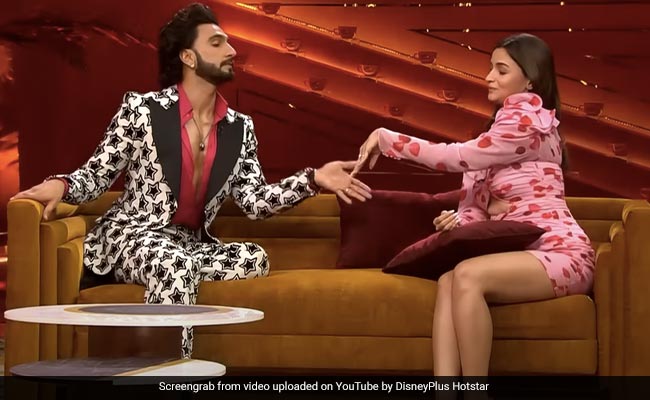 Alia Bhatt and Ranveer Singh in a still from the show. (courtesy: YouTube)

The first guests on Karan Johar's talk show Koffee With Karan 7, which streaming on OTT platform Disney+Hotstar, were Alia Bhatt and Ranveer Singh and they surely do like their 'koffee'(with a K) unfiltered, as do we. The highlight of the episode, besides the many, many stories about Alia Bhatt and Ranbir Kapoor, was the rapid fire round. While Ranveer Singh took home the hamper. Alia Bhatt made up for it by sharing little details about her proposal, her dreamy wedding, the Kapoors and more. During the Rapid Fire, Ranveer Singh was asked about the last person he stalked. Kiara Advani was his answer. When Ranveer Singh was asked "Why," the actor replied, "Why not. I like her, she is a Sindhi." Alia Bhatt stalked Janhvi Kapoor, because she loved a set of pictures she posted. Alia didn't say which one.

About the performances that moved them, Ranveer Singh named Alia Bhatt - for her performance in Gangubai Kathiawadi, while Alia was moved by Ranveer's portrayal of Kapil Dev in 83 and Kriti Sanon in Mimi.

When Ranveer was asked about his "key demand of yours that can be considered a starry tantrum," he said, "Sometimes I ask for the generator to remain on overnight because I sleep in the van. Morning is not my fine time of the day. I am nocturnal, I am a night bird, I cannot sleep at night and I struggle to wake up in the morning."

Alia Bhatt also talked about the best compliment she received and it happened to be from Ibrahim Ali Khan, who was one of the ADs on Rocky Aur Rani Ki Prem Kahani. Alia then read out a message that Ibrahim sent her.

About Alia Bhatt's current obsession - watching cooking videos on Reels, "even though I don't know how to cook but they look so good," said Alia Bhatt.

"One myth about marriage that got busted as soon as you tied the knot?" Alia's ROFL reply: "There is no such thing as a suhag raat. You are tired. I was exhausted with everybody that you just want to go to sleep."

In the rapid fire, Alia and Ranveer were also asked with what names have they saved their respective partner's numbers in their phones. Ranveer's reply: "Baby," with pink heart and baby emojis. However, that wasn't the case earlier. The actor revealed that for the "longest time" he had her number saved as Deepika Padukone. Alia, on the other hand, has saved Ranbir Kapoor's number as husband (with a heart emoji).

How special is Alia Bhatt's diamond ring? Her answer: "Oh! My diamond ring is extremely special not because it is a beautiful diamond but because it is has been engraved with our relationship philosophy, which is very close to my heart." When KJo asked, what is that," Alia added, "Mrs Hipster. Each alphabet stands for something but that I will not reveal."

Charu Asopa On Ending Marriage To Rajeev Sen: Doing It For Daughter Ziana