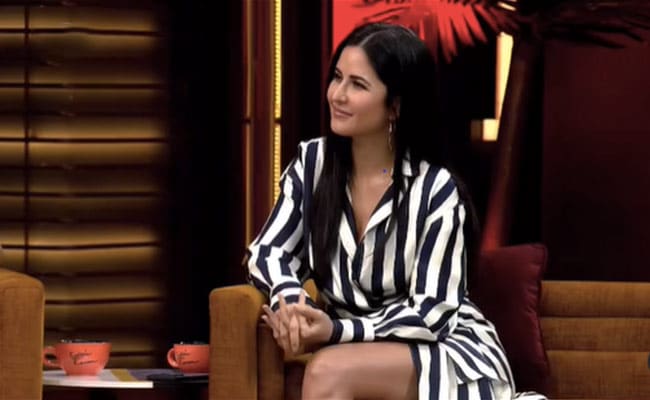 A still from the video. (courtesy: karanjohar)

Karan Johar has dropped a promo for the upcoming episode of Koffee With Karan, and this time, Bhoot Police stars Katrina Kaif, Ishaan Khatter and Siddhant Chaturvedi will appear on the show. Looking at the promo, the trio brought "absolute chaos and unabashed laughter" to the Koffee couch. The clip starts with KJo asking, "Are we set in our way" as the trio took time to figure out on which couch they should sit. To this, Ishaan says, "Hum kahin bhi bhatak sakte hai (we can be anywhere)". Next, Karan can be seen asking Katrina about Alia Bhatt's comment: "There is no such thing as a suhag raat on suhag raat." To this, Katrina says, "Maybe there can be suhag din," making Siddhant and Ishaan raise their eyebrows, while KJo adds, "Ahh, I like this".

ICYMI, in the first episode ofKWK, when Karan Joha asked Alia Bhatt: "One myth about marriage that got busted as soon as you tied the knot?" To this, the actress said, "There is no such thing as a suhag raat. You are just tired."

Moving on, in the video, Karan Johar asks Ishaant Khatter, "who according to you is the sexiest bachelor in the industry". Ishaan replies, "KJo bro". On hearing this, Karan Johar says, "Mujhe uss nazar sai kabhi kissi nai dekha nahi. Next, he asks Katrina that who she goes to for thirst trap, and to this, she replied, "Recently I am going to Ranveer Singh's page," leaving everyone in splits.

Sharing the promo, Karan Johar captioned it as: "The bringers of absolute chaos & unabashed laughter on the koffee couch is this trio!"

Watch the new Koffee With Karan 7 promo below:

Katrina Kaif, Siddhant Chaturvedi and Ishaan Khatter's Phone Bhoot will release in the theatres on November 4.

Meanwhile, the new episode of Koffee With Karan will stream on Disney+Hotstar on Thursday (August 8).