Here's how much fun Sonam, Rhea and Harshvardhan Kapoor had on the sets of Koffee With Karan. 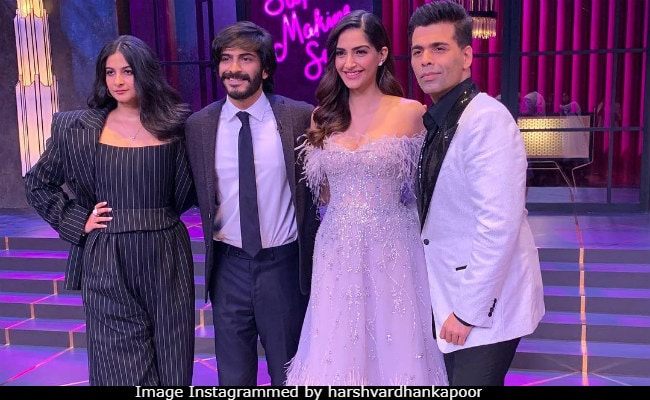 After Janhvi and Arjun Kapoor, get ready to witness another set of Kapoor siblings on Karan Johar's Koffee With Karan 6. On Thursday, Harshvardhan Kapoor shared a photo, featuring himself and his sisters Rhea and Sonam Kapoor, and Karan Johar, from the sets of Koffee With Karan to say: "Get excited!" In the photo, Harshvardhan complements his fashionista sisters in a suited look. Rhea, who is also Sonam's stylist, opted for a striped look while Sonam was gorgeous in an off shoulder dress. Karan Johar, who also has a reputation for being an ardent fashion follower, joined the gang of Kapoors in a monochrome look.

Here's how much fun Sonam, Rhea and Harshvardhan Kapoor had on the sets of Koffee With Karan.

A post shared by Harshvardhan Kapoor (@harshvardhankapoor) on Dec 6, 2018 at 6:59am PST

On the show, Sonam will reportedly talk about her big fat wedding in May while Rhea will reportedly let us in on a few secrets about the Kapoor sisters. Speaking to DNA, a source said: "They know everything about each other and Rhea is Sonam's biggest confidante. So, there will be many secrets spilling out for sure. Also, this is the Veere Di Wedding actress' first episode on KWK post her wedding, so there will be many details from the nuptials, which nobody knows about."

Sonam Kapoor has previously sipped koffee with Karan on the show's last three seasons. Earlier, she's shared the koffee couch with colleagues such as Kareena Kapoor and Deepika Padukone. Though this is the first time she's appearing on the show with her siblings, Sonam's Season 4 Koffee With Karan episode was with her father Anil Kapoor.