"I wish us health of mind and body and contentment in every experience," wrote Kim Sharma 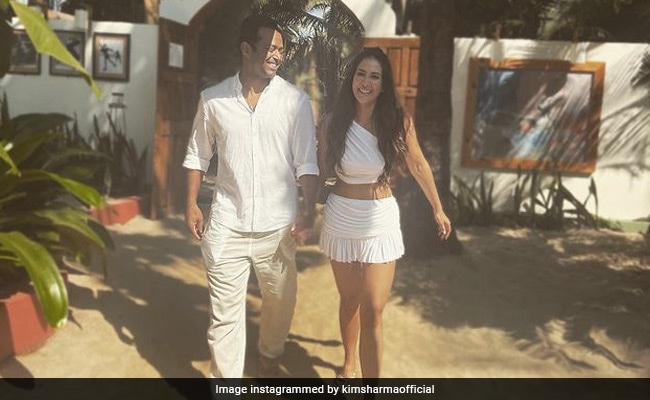 Kim Sharma and Leander Paes, who reportedly started dating in 2021, often share mushy pictures with each other on social media. On Saturday, Kim posted a set of happy pictures with Leander, in which the couple can be seen twinning in white outfits as they walk hand-in-hand. She captioned the post: "Walking into 2022 like... Happy new year to all you lovelies. I wish us health of mind and body and contentment in every experience. Love and light. Thank you for all your love." The comments section was filled up with greetings from Kim's Instafam.

Meanwhile, Leander Paes shared a video and he wrote: "Ending the year, sending my choicest greetings to everyone on a happy, safe and healthy #NewYear #LionHeart #FlyingMan #YearEnd."

In 2021, Kim Sharma trended a great deal after pictures of her with rumoured boyfriend and tennis star Leander Paes surfaced on the Internet and went insanely viral. They were later spotted strolling on the streets of Mumbai.

They made their relationship Instagram official last year. They shared similar posts with each other on their respective Instagram profiles. "Magic," Leander Paes had captioned the post.