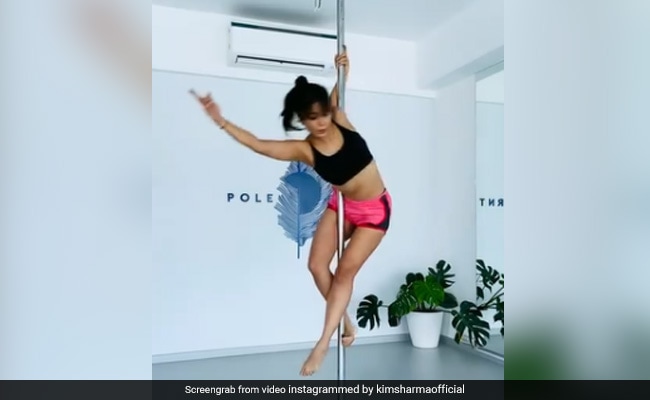 Kim Sharma in a still from the video. (Image courtesy: kimsharmaofficial)

Actress Kim Sharma, who has quite a bit of a reputation as a fitness enthusiast, loves to sweat it out in the gym. However, her latest Instagram entry is a bit different. It happens to be a video from a pole dancing session. In the video, Kim can be seen sliding down the pole gracefully as Sia's track plays in the backdrop. Kim Sharma, 41, sharing the video on her Instagram profile on Thursday, captioned her post: "Mid-week spin." In the comments section of her post, Kim Sharma's Mohabbatein co-star Preeti Jhangiani wrote: "Wow! Nice!" Kim replied to her remark and she wrote: "Thanks chickie."

Last month, the actress trended a great deal after pictures of her with rumoured boyfriend Leander Paes surfaced on the Internet and went insanely viral. Pictures of the rumoured couple also put them on the list of trends recently. They were later spotted strolling on the streets of Mumbai.