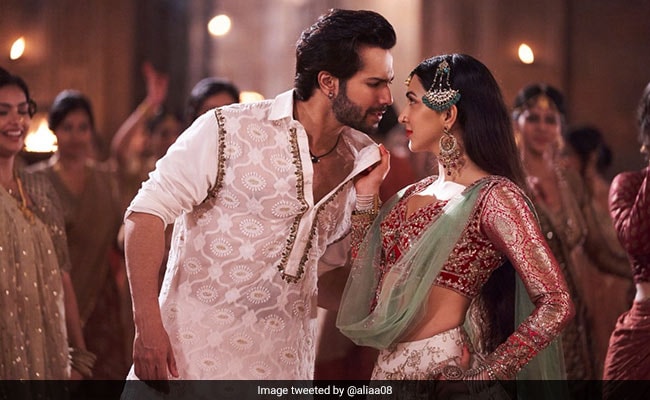 Kalank's new song absolutely First Class hai! Varun Dhawan AKA Zafar, who flirts with life and danger, shared the sprightly track with us just a day after Holi. He particularly thanked Arijit Singh, who mostly sings romantic Bollywood numbers, for signing up for the peppy track, and wrote: "MASS! First Class! Thank you, to everyone behind this song I'm so happy Arijit has sung a mass number for me after Palat." The song begins with Varun Dhawan jazzing up the celebratory mood with his catchy dance moves and ends with Varun's signature step. And all we can say is, sab 'First Class' hai."

Mid-way through the song, Kiara Advani makes a special appearances and sets the floor on fire along with Varun Dhawan.

The song also has glimpses of a wedding - that of Alia Bhatt's Roop and Aditya Roy Kapur's Dev Chaudhry - something that provides a stark contrast to the otherwise jovial feel of the song. Roop's eyes well up as the new bride while she continues with the wedding ceremony without a word of protest.

First Class is the second song from Kalank to be released after last week's Ghar More Pardesiya. First Class also has glimpses of Madhuri but towards the absolute end.

The ensemble cast of Kalank also includes Sonakshi Sinha (who has been cast as Satya) and Sanjay Dutt (who plays the "formidable" Balraj Chaudhry). Directed by Abhishek Varman and produced by Karan Johar, Kalank is set in the pre-independence era of 1945. Kalank was conceptualised by Karan Johar some 15 years ago and will finally hit screens on April 19.