'Don't Ask,' Tweets Alia Bhatt When Asked How She Danced In Kalank Song With Madhuri Dixit Looking On

In Kalank's Ghar More Pardesiya, no dance-off has been attempted and Alia Bhatt has the floor to herself while Madhuri Dixit looks on 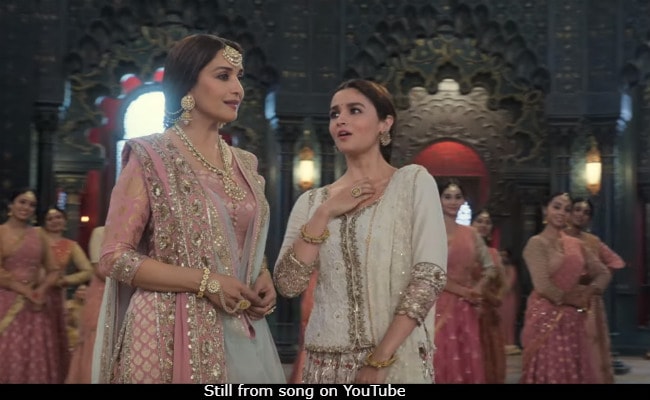 You might or you might not have been impressed by Alia Bhatt's Kathak routine in Ghar More Pardesiya, the newly-released song from upcoming film Kalank. Chances are, Alia doesn't really care what you think because she appears to have won over a crazy tough audience - her co-star Madhuri Dixit, for whom Alia dances for much of her screen time in the song. When it comes to dancing, and especially when it comes to Kathak, Madhuri is nonpareil and while some have braved the floor with her, very few have lived to tell the tale - most notably, Aishwarya Rai Bachchan who acquitted herself with honours in Dola Re from Devdas.

In Ghar More Pardesiya, no such dance-off has been attempted and Alia Bhatt has the floor to herself while Madhuri Dixit looks on admiringly. However, as actress Dia Mirza pointed out in a congratulatory tweet, the presence of someone who has reigned undisputed since Tezaab's Ek Do Teen is enough to make the surest of foot quail. "Don't ask," Alia tweeted back to Dia - and we won't.

Don't ask!!!!!! Haha but thank youuuu for the words of encouragement https://t.co/deJT0Yx6N3

Alia's performance received mixed reviews from the rest of Twitter. Many tweets lamented the lack of dancing on Madhuri's part:

You know it's not a good time to be alive when Alia dances in the entire song and Madhuri just stays still. #GharMorePardesiya#Kalank

The Kalank song is so generic in sound and so weird in visuals, you have Madhuri in the frame but you make her stand and watch Alia dance?? lol at least SLB had the guts to make his fav Ash dance with Madhuri and let the chips fall where they may.

So you're telling me that you want to take Madhuri in a SLB like song just to make her stand and watch? Do you not know how to use the talent you have in hand? Also, no hate towards Alia but I feel there's a bit of finesse lacking in her performance. But still a decent try.

Alia's really put in her heart and soul in the song,Varun's scenes might be less in the song but his small glances are itself very impactful.Madhuri looks ethreal as always but missed her dance in the track

#GharMorePardesiya yea that was dissappointing. The song isn't that good and Alia is meh.
How do you not have madhuri dancing?! pic.twitter.com/dgLGetR4QO

Others thought Alia had done a neat job:

Madhuri's biggest USP imo is her ability to emote whilst keeping up with intricate choreo. I think Alia came pretty darn close. Just like PC did in Pinga. I love my faves OMG.

Alia was so graceful and at ease in her Kathak moves in #GharMorePardesiya didn't expect it.
Her expressions could've been better tho cuz expression wise Madhuri always steals the thunder

Alia did a good job. There were a couple moments where she came close to over-doing it but I think overall she did well. Madhuri was way better at the lip sync at the beginning tho. Can't wait to see Mads dance! #GharMorePardesiya

Some thought Alia's performance was not without Kalank:

#GharMorePardesiya: Underwhelmed with Alia so far. She has clearly made an effort but she doesn't "click" with this larger-than-life role. You can tell she is posturing, especially in her lip-sync portions with the effortless Madhuri. Wish there was a dance sequence with Madhuri.

Song is really good. And good to see old Madhuri back. Varun looked out of the place. Katthak is hard. Alia tried. Can't see her expressions though, because of those long shots. She lacks grace. And that sargam part with her expressions were laughworthy. Major Bahubali vibes.

Alia Bhatt and Madhuri Dixit in one frame.
Magical!!

And another made it clear that nothing less than this would do:

I want to see Madhuri and Alia dance together