Ghar More Pardesiya begins with alternate glimpses of Zafar and Roop amidst a colourful setting of Ram Navami celebrations. 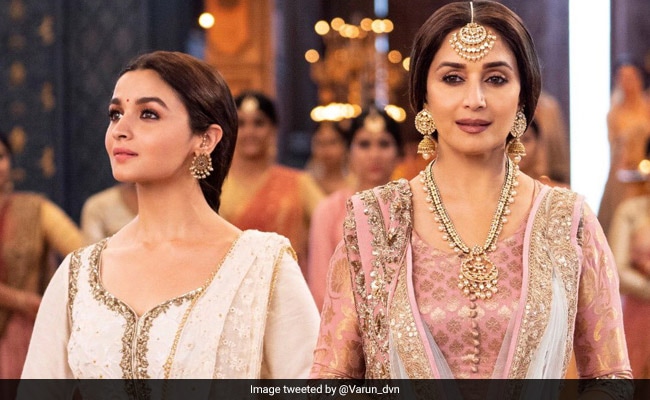 Ghar More Pardesiya - the first song from Kalank - is here and will only make you say wow! Ghar More Pardesiya has been introduced as Zafar's world (played by Varun Dhawan) and in the song, Alia Bhatt's Roop steps in to the magical world of Zafar for the first time. Roop is mesmerised by the charm that the streets of Hira Mandi has to offer. But the highlight of the song is when Roop takes the dance floor as Madhuri Dixit's Bahaar Begum watches her closely. Composed by Pritam, Ghar More Pardesiya has been beautifully sung by Shreya Ghoshal and Vaishali Mhade. The charm of Ghar More Pardesiya is that it will indeed have you glued to the screen for as long as three minutes and you may even play it on loop.

Zafar and Roop, whose tale of romance is at the epicentre of Kalank, never meet in the song, leaving us yearning to see these two together on screen. Watch Ghar More Pardesiya from Kalank here:

The ensemble cast of Kalank also includes Aditya Roy Kapur (who plays the "virtuous" Dev Chaudhry), Sonakshi Sinha (who has been cast as Satya) and Sanjay Dutt (who plays the "formidable" Balraj Chaudhry).

Directed by Abhishek Varman, Kalank is all set to hit screens on April 19.