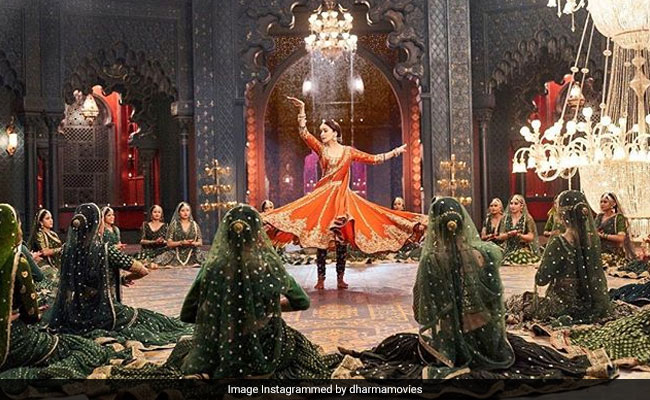 Madhuri Dixit Nene, who has joined creative forces with veteran choreographer Saroj Khan for a dance number Tabha Ho Gaye in Kalank, says the dance director knows how to make women look graceful on-screen. In the past, the two artistes have worked on memorable songs like Ek Do Teen, Choli Ke Peeche, Dhak Dhak Karne Laga and Maar Daala. "Saroj ji is one of the choreographers I have collaborated with who goes beyond the surface of lyrics of a song when she choreographs. In cinema, we tend to create steps keeping the camera angle in mind. But Saroj ji doesn't limit the dance in physical movements." Madhuri told IANS here during an interview.

"She finds a spiritual aspect and works on expressions. She knows how to make a woman look graceful and beautiful through a dance," she added. "Perhaps that is why every song we did together, holds a recall value even today. If the youngsters are still dancing to those numbers, I think we did something right," she smiled.

The song Tabah Ho Gaye, a solo dance number picturised on Madhuri, will release on Tuesday. It is choreographed by Saroj Khan and Remo D'Souza. "The song comes at a very poignant time in the narration when the back stories of each character are unfolding. The song is a quite defining moment in the story," the actress said.

Madhuri is a trained Kathak dancer and from the beginning of her career she has also cemented her space as a skilled dancer. With the changing times, is the appreciation of classical dance in Indian cinema fading away?

"No, I do not agree with that at all. The audience is always intelligent. It is a wrong notion that youngsters only like hip-hop and western dance. After a long time, we have seen a dance like Ghar More (from Kalank) and the audience has really loved the dance. It is a classical dance form that we have presented to the audience and they have enjoyed it," she said.

"It only shows that if the dance is well-choreographed, no matter which form (of dance) it is, people will like it... people of all generations. I think that is the power of good dancing. I am quite confident about Tabah Ho Gaye also, because again it is a very emotional, poised, nicely choreographed song," she said.