Saroj Khan said that Salman Khan "promised" to work with her 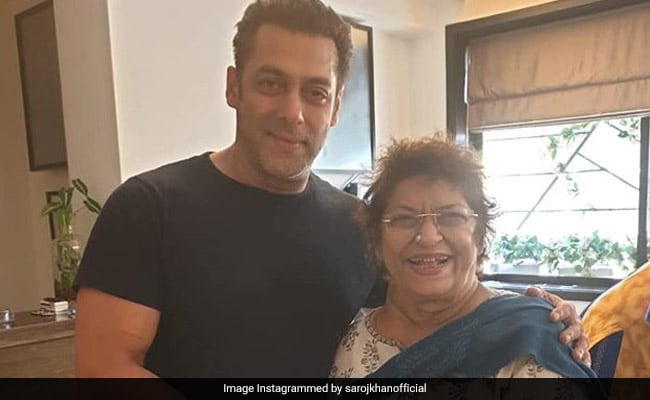 Superstar Salman Khan recently met veteran choreographer Saroj Khan after learning that she's out of work in Bollywood, reported mid-day. Speaking to the publication, Saroj Khan said that the 53-year-old actor "promised" to work with her after she said Bollywood has no new offers for her and that she's merely conducting dance classes as of now. "When we met, Salman asked me what I was doing nowadays. So I told him honestly that I don't have any work [film offers], and that I am teaching Indian classical dance to young actresses. Upon hearing that, he said, 'Now, you will work with me'. I know he is a man of his word, so he will keep his promise," mid-day quoted Saroj Khan as saying.

Saroj Khan reportedly met Salman Khan on Thursday. On an unverified Instagram profile, which appears to be that of Saroj Khan's, a photo of the duo was shared recently with the caption: "It was a pleasure meeting you after so long Salman Khan! God bless you always my darling!" Saroj Khan and Salman Khan reportedly had a difference of opinion while filming Andaz Apna Apna in the Nineties but repaired severed ties sometime in 2018.

It was a pleasure meeting you after so long @beingsalmankhan ! God bless you always my darling!

Saroj Khan may not have been signed up for any new project but she made a comeback with Manikarnika this year and has also choreographed a song featuring Madhuri Dixit in the upcoming Kalank.

. Choreographer Saroj Khan, who returned to Bollywood after four years at Kalank. where she put the song for Madhuri Dixit, criticized the dream factory for non-original songs and dances. The choreography master criticized Bollywood's quality standards, saying that "choreographers cannot even come up with original numbers," and dances are mostly copied from the West. Saroj staged a dance for Madhuri Dixit in Kalank. She told the tabroid: "Four years after Gulaab Gang, I put another song for Madhuri Dixit. "Tabahi" is a sad song with a fast rhythm. Madhuri and I danced from the bottom of our hearts, and I hope that after seeing this, people will remember Saroj Khan again. . @madhuridixitnene @sarojkhanofficial