Khushi and Shanaya's cousin Anshula Kapoor also hung out with them 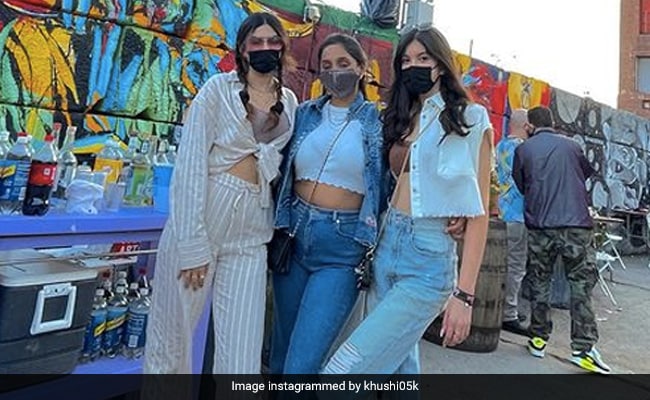 Khushi Kapoor is currently chilling like a villain in New York with her cousins Shanaya and Anshula Kapoor, her latest entry on Instagram proves it. On Friday, Khushi Kapoor posted a couple of pictures from their outing and it can be said that the Kapoors sure know how to raise the style quotient. In one of the pictures, Khushi looks stunning as ever in a striped knot shirt, which she paired with matching trousers and white sneakers. Shanaya can be seen wearing a brown crop top, a white sleeves jacket and denims. In another photo, Khushi, dressed in a white top, white trousers and black jacket, can be seen clicking a mirror selfie with Anshula Kapoor. She captioned the photos simply with an apple icon, you know, for the Big Apple.

Check out the stunning pictures of Khushi, Shanaya and Anshula Kapoor here:

Earlier in the day, Shanaya Kapoor set the Internet ablaze with her "extra glossy" post. Here's the photo we are talking about:

Khushi Kapoor and actress Janhvi Kapoor are the daughters of filmmaker Boney Kapoor with his late wife, actress Sridevi. He was previously married to Mona Shourie, with whom he has a son, actor Arjun Kapoor, and Anshula Kapoor.

Shanaya Kapoor is the daughter of Boney Kapoor's brother and actor Sanjay Kapoor.

Shanaya Kapoor will soon make her debut in Bollywood with a Dharma Productions project.