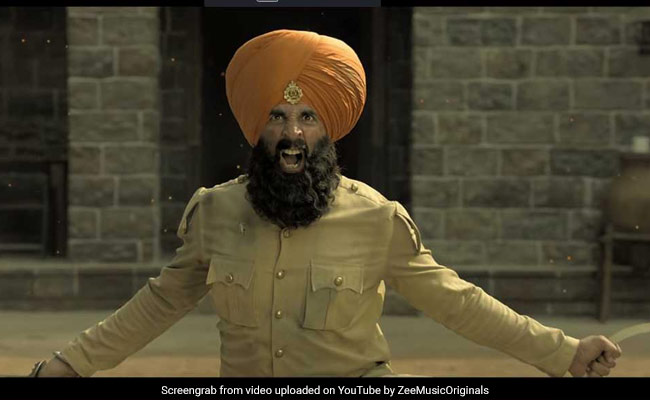 The power-packed track Ajj Singh Garjega is the second song to be released from Anurag Singh's film Kesari. The two minute-long video, which hit the Internet on Tuesday, showcases the journey of the "bravest battle ever fought." The song, which features film's lead actor Akshay Kumar, is not merely a portrayal of the Battle of Saragarhi, it also is a shout out to the "power of of 21 Sikhs." With its hard-hitting lyrics and its intense visuals, Ajj Singh Garjega stirs up the viewers' emotions and how. Ajj Singh Garjega has been sung by Jazzy B and it has been composed by Chirrantan Bhatt. The credit for the song's soulful lyrics goes to Kunwar Juneja.

Akshay Kumar, who plays the lead role in Kesari, announced the news of Ajj Singh Garjega's arrival on his Instagram profile on Tuesday afternoon. "The loudest roar with the power of 21 Sikhs, Ajj Singh Garjega in the voice of the very talented Jazzy B is out now," wrote Akshay.

Kesari has been directed by Anurag Singh and it has been collaboratively produced under Karan Johar's production house Dharma Productions and Cape of Good Films. The film also features Parineeti Chopra, Mir Sarwar, Vansh Bhardwaj and Jaspreet Singh in key roles.

Kesariis set against the backdrop of the Battle of Saragarhi, which took place in 1897, as a part of which 21 Sikh soldiers of the British Indian Army fought against 10,000 Afghan invaders. The film is scheduled to release on March 21, 2019.