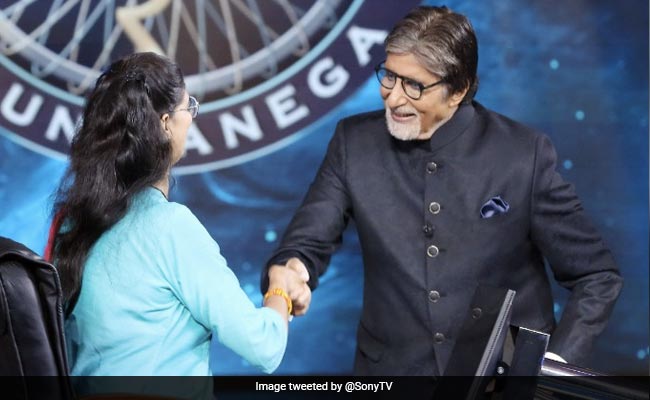 Big B on the sets of Kaun Banega Crorepati 13. (courtesy Sonytv)

Tonight's episode of the TV quiz show Kaun Banega Crorepati 13 began with host Amitabh Bachchan sending Janmashtami greetings to the audiences. He then began the game with Himani Bundela, the first visually impaired contestant on the show. The 25-year-old contestant happens to be a teacher from Agra, Uttar Pradesh. Throughout the course of the game, Big B was super inspired by her courage and determination and said that she is a perfect "example and an inspiration" for the viewers. In a segment of the show, Big B surprised Himani by calling her favourite singer Jubin Nautiyal on the phone. Himani revealed that she would use the winning amount for the betterment of visually impaired students. On a lighter note, Himani gave Big B a mathematics lesson of sorts, where she taught him tricks and shortcuts for easy calculations. Big B was amused and joked that he should "leave the show and come attend Himani's classes."

Himani Bundela managed to earn Rs 50 lakh in tonight's episode and she will be attempting the Rs 1 crore question on Tuesday's episode.

Who among these wrote under the pseudonym of 'Ghanshyam Vyas'?

Which is the highest mountain in Antarctica?

Which is the oldest of the 7 wonders of the ancient world?

In 2021, Bhavani Devi became the first Indian to qualify for which Olympic event?

Serum Institute of India, manufacturer of the Covid-19 vaccine Covishield, was founded by which business family?

Which common portfolio have Rajnath Singh, Nirmala Sitharaman and Arun Jaitley, have all held in the Union cabinet?