"Plagiarism in the time of COVID -19," wrote Deepika Padukone 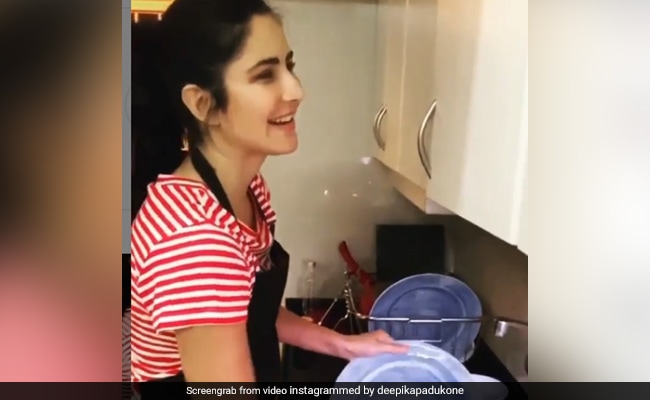 Katrina in a still from the video shared by Deepika. (courtesy: deepikapadukone)

Deepika Padukone's episode 5 of "Productivity In The Time Of COVID -19" took a swift turn and is now called "Plagiarism In The Time Of COVID - 19," courtesy Katrina Kaif. In case you are wondering what we are talking about, we are referring to the "Padmaavat" actress' latest Instagram entry. On Thursday night, Deepika shared Katrina's video, in which she could be seen washing dishes. She wrote in her caption that the episode of her "productivity" special series has been cancelled because Katrina Kaif "stole her idea" (all in good humour, of course). "I regret to inform you that Season 1: Episode 5 stands cancelled because Katrina Kaif stole my idea! Hmmff! #PlagiarismInTheTimeOfCovid19," wrote Deepika Padukone.

I regret to inform you that Season 1:Episode 5 stands cancelled because @katrinakaif stole my idea!Hmmff!!!#PlagiarismInTheTimeOfCovid19

The video was originally shared by Katrina Kaif, earlier this week. In the video, the Bharat actress explained that staff are practicing self-isolation in the wake of the coronavirus. She taught her fans the right way to wash dishes. "Since the house helps are also practicing self-isolation, Izzy (Katrina's sister Isabelle) and I have decided to take turns to do the washing up. I thought I would do a little professional tutorial," Katrina said in the video.

Both the actresses frequently feature on the trends list for their Instagram exchanges. Last year, Deepika gave a big shout out to Katrina when the latter launched her own beauty line. Rumours about Deepika Padukone and Katrina Kaf's alleged feud surfaced after Deepika Padukone, during an episode of Koffee With Karan season 3, said that she would like to ask Katrina Kaif, "Can I see your passport?"

In 2018, Katrina Kaif received an invite to Deepika Padukone and Ranveer Singh's Mumbai reception - and she did go, putting an end to the rumours that the actresses don't share cordial relations. That's not it, On Karan Johar's talk show Koffee With Karan 6 Katrina said that she is very "excited" about the wedding and that she was "looking forward to an invitation" to Deepika and Ranveer's wedding.

On the work front, Katrina Kaif was last seen in Bharat, co-starring Salman Khan and Disha Patani. She will next be seen in Rohit Shetty's Sooryavanshi, starring Akshay Kumar.

Deepika recently signed the Hindi remake of the 2015 film The Intern, co-starring Rishi Kapoor. The original film featured Robert De Niro and Anne Hathaway in the lead roles. She will also be seen along with husband Ranveer Singh in Kabir Khan's sports drama '83, in which Ranveer will play the role of Kapil Dev and Deepika will play Kapil Dev's wife Romi Bhatia. The actress was last seen in last seen in Meghna Gulzar's Chhapaak.