Katrina Kaif Cooked A Dish But "Not Sure What It Is". See Her Adorably Honest Post

Katrina's post was flooded with queries on Instagram asking if that's a pancake. Take a look at it here 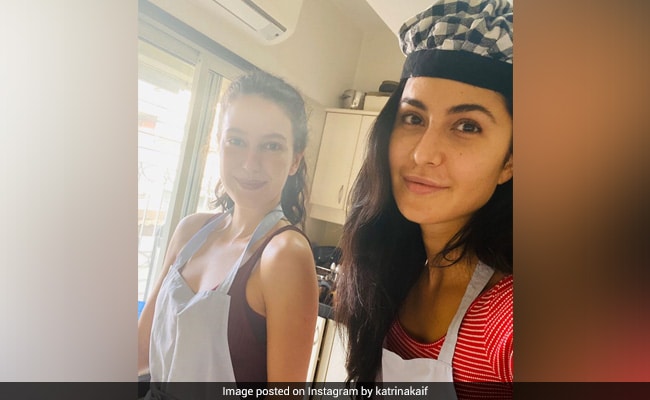 First washing the dishes and now cooking. Katrina Kaif, in lockdown like all of us, is spending a lot of time in the kitchen. Katrina had earlier revealed that her house helps are also practising social distancing and hence she and her sister Isabelle are in charge of running the house. On Instagram, she recently shared a glimpse of her TGIF moments and looks like they didn't go as planned. Katrina turned on her chef mode - wearing an apron and a chef hat - and hit the kitchen with a spatula, some batter and a good old tawa. And the end of their cooking, Isabelle and Katrina couldn't figure out what exactly they made. Katrina shared a video in which she showed a pancake sort of a thing on the tawa while Isabelle can be seen bursting into a fit of laughter.

"We're not sure what it is either... we'll let you know when we do," Katrina captioned her post. Katrina's post was flooded with queries on Instagram asking if that's a pancake. Take a look at it here:

However, Katrina's other household ventures went well. Like the time when she was spotted sweeping the house. A few minutes later however, she was playing cricket with the broom. "This is seriously good exercise, BTW," she wrote.

Katrina first began the drill with a dish-washing video, in which she confessed that since she's not done the dishes in a long time, she's still brushing up the lather-rinse-repeat order of things.

Katrina is also working out at home and taking sun-kissed selfies with Isabelle.

So that's how Katrina and Isabelle are keeping themselves busy in the lockdown. What about you? Tell us in the comments below.