"He is a hapshi, I can't help it," said Ananya for Kartik Aaryan 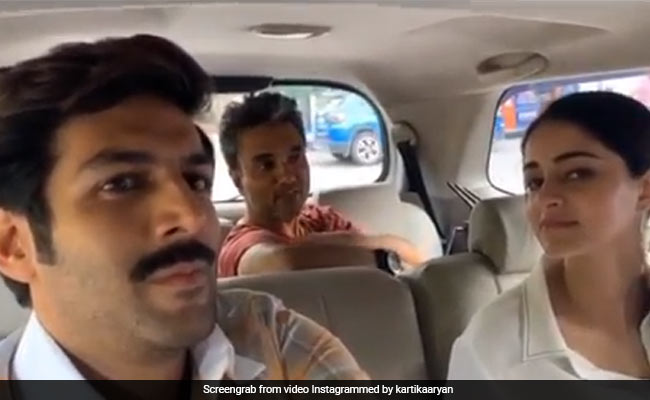 Do you know how much weight Kartik Aaryan and Ananya Panday gained for their work-in-progress film Pati Patni Aur Woh? In a video Kartik posted on Instagram on Thursday, he claimed that he gained "7 kgs" without any diet plan to look convincing as Chintu Tyagi (his character in the film) but humorously complained that Ananya Panday gained only "3 gms" for her role. However, the 20-year-old actress came up with an epic response and said that she's "worth the weight." Ananya also pointed out that Kartik Aaryan had put on weight not because he is dedicated to his role but because he gets to "eat in every shot." The video is actually a birthday wish for Pati Patni Aur Woh director Mudassar Aziz, who turned a year older on Thursday.

In the video, Mudassar Aziz can be seen telling Ananya Panday that he asked Kartik Aaryan to put on weight for the film and he did it without any diet chart in just 15 days but she failed to put on weight even after three months. To this, Ananya replies: "Because he is a hapshi, I can't help it." Ananya also claims that she gained over 3 kgs for her role but Kartik interrupts her and says: "Why are you lying, you put on only 3 gms." Later, Ananya jokes about her co-star's weight gain and says: "You didn't have to. You wanted to put on weight."

Sharing the video, Kartik Aaryan captioned it: "Happy Birthday to the man who always wants weight in the performance or the performers, Mudassar Aziz. I gained around 7 kgs for Chintu and also did Ananya Panday (3 gms)."

In a separate post, Ananya Panday wished Mudassar Aziz in a Dilwale Dulhania Le Jayenge style. She recreated the epic scene from the film with the director and wrote: "How can we not look up to you - aapke naam main hi Sir hain. Happy birthday, Mudassar Aziz. #PatiPatniAurWoh #MyDDLJmoment."

Kartik Aaryan and Ananya Panday are currently shooting for Pati Patni Aur Woh in Lucknow. They co-star Bhumi Pednekar in the film. Pati Patni Aur Woh is a remake of BR Chopra's 1978 film of the same name, which starred Sanjeev Kumar, Vidya Sinha and Ranjeeta Kaur in main roles. In the remake, Kartik and Bhumi will play a married couple while Ananya will be seen as the 'woh' in their relationship. The film is slated to release in January next year.