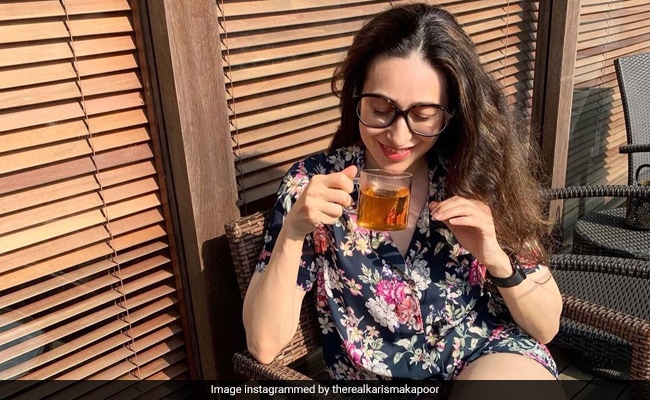 Every Friday, expect Karisma Kapoor to light up our feeds. The actress has given a bright start to the weekend, and yes we are smiling. With India tackling the second Covid-19 wave, Karisma, just like all of us, is trying to stay positive. The 46-year-old actress dropped a jovial picture of herself and gave fans a peek of her at-home scenes. In the picture, she is accompanied by a cuppa and is clicked posing at her favourite spot in the house - her balcony. Karisma can also be seen sporting glasses. "Stay at home," wrote Karisma in the caption. She also added the hashtags "trying to stay positive," "we shall overcome" to her post. Take a look:

Earlier this month, Karisma resumed her sofa series that she started last year during the lockdown. Karisma shared a blast from the past and wrote, "Mood during the past year" and added hashtags "sofa series" and "flashback Friday" to her caption.

Here are some more glimpses of Karisma's 'on the couch' Instagram series:

Then, Karisma allowed us to take a look at her Saturday routine. Excited? The actress starts her weekend by washing and drying veggies. This is one of the chores she loves to perform. "That's how Saturday goes...Doing something I really love! Washing and drying all the veggies," read the caption.

Karisma is often seen rummaging through the past albums and revisiting the memories. A few weeks ago, she took a trip down memory lane and mined a family photograph. Sharing the picture, she wrote, "Missing family holidays."

Karisma made her OTT debut last year with the web series titled Mentalhood.