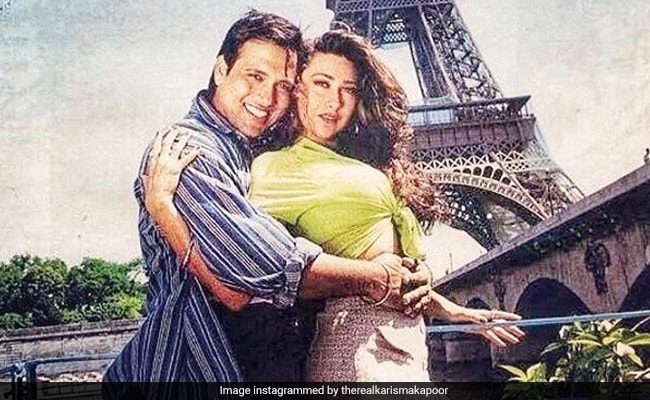 Karisma Kapoor sent her fans on a search mission with her latest Instagram post. The actress shared a throwback picture, which also features Govinda, from one of her film sets and asked her Instafam to guess the name of the film. In the old picture, Karisma and Govinda, who have co-starred in several films, can be seen posing against Eiffel Tower. She can be seen wearing a neon green shirt and mini skirt while Govinda can be seen sporting a blue-and-grey shirt and black trousers. Adding another memorable photo to her Instagram diaries, Karisma wrote: "Dancing around the Eiffel Tower. Hopefully, those carefree days will return again very soon. Which film is this picture from? #guessinggame #flashbackfriday #paris." Many of her fans commented on her post that the picture is from her 1997 film Hero No. 1 and we also believe it was photographed on the set of the same film, which also featured Paresh Rawal.

In case you are wondering how we are so sure that Karisma's throwback picture is from Hero No. 1, here's the answer. Both Kareena and Govinda shot the song Mohabbat Ki Nahi Jati from the film in the same outfits in Paris.

Dancing around the Eiffel Tower hopefully those carefree days will return again very soon Which film is this pic from ? #guessinggame #flashbackfriday #paris #france

Karisma Kapoor and Govinda have worked together in several hits such as Coolie No 1, Hero No 1, Raja Babu, Shikari and Saajan Chale Sasural, to name a few. Their on-screen chemistry was loved by many in the Nineties.

On the work front, Karisma was last seen in web-series Mentalhood, in which she played a mother to three kids. Her husband's role was played by Sanjay Suri. Mentalhood also featured Sandhya Mridul, Shilpa Shukla, Tillotama Shome, Dino Morea and Shruti Seth in pivotal roles.