Karisma Kapoor shared a picture of herself hugging Samaira, who was all smiles 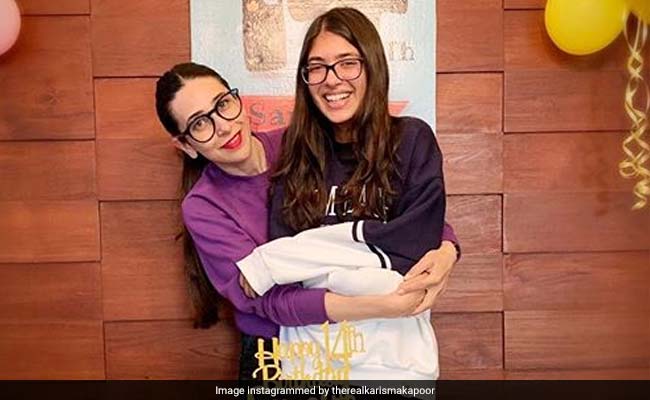 Karisma Kapoor shared a glimpse of her daughter Samaira's 14th birthday party on Instagram. Karisma shared a picture of herself hugging Samaira, who smiled from ear-to-ear. Karisma wore a violet sweatshirt with denims while her daughter looked cute in two-shade sweatshirt with leggings. Samaira's birthday cake was quite colourful too. "Happy birthday to my precious baby girl," she captioned the post. Samaira is the elder of Karisma Kapoor's two children her first marriage to businessman Sanjay Kapur. Samaira's brother Kiaan will turn nine-years-old tomorrow. But for now, it's time to celebrate Samaira's big day.

Take a look at Karisma Kapoor's post for her daughter Samaira:

Karisma and Sunjay got married in 2003 and divorced in 2016. Samaira was born in 2005 while Kiaan in 2010. So far, the Kapoors have not talked about Samaira's plans of joining Bollywood. However, in 2013, Samaira starred in a short film, titled Be Happy, in which she also played a key role as a cinematographer. Samiara was also involved in scripting and editing of the film.

Samaira has illustrious Bollywood celebrities in her family tree. She is the great-granddaughter of Raj Kapoor and her grandparents are actor couple Randhir Kapoor and Babita. Samaira is the niece of Kareena Kapoor and Ranbir Kapoor.

As of now, Karisma Kapoor has retired from films though she regularly features on various magazine photoshoots and advertisements. Karisma was among the top crop of actress in the Nineties and she has starred in films like Hero No 1, Raja Hindustani, Biwi No 1, Zubeidaa, Fiza and Dil To Pagal Hai, among others.