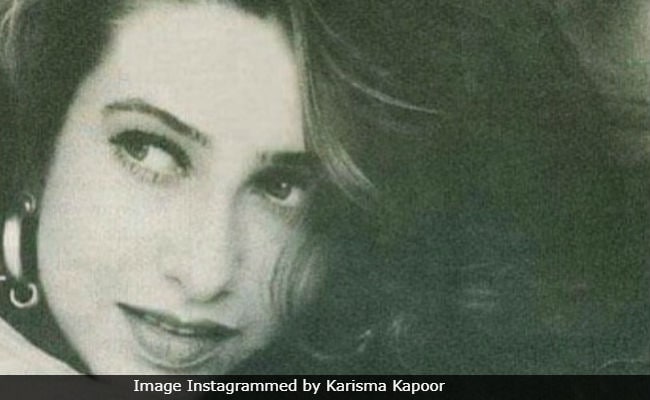 We simply love Flashback Fridays and Karisma Kapoor's latest Instagram post proves why. The actress struck gold in her photo archive and shared a stunning picture of herself on her Instagram profile on Friday. Karisma shared the grey scale close up shot with her 4 million followers on Instagram, out of which, over 45,000 fans have liked the picture as of now. Bollywood actors like Chunky Panday and Sanjay Kapoor have also liked the picture. Just like us, Karisma Kapoor's Instafam also loved the throwback picture and the comments section on the post was flooded with remarks like "beauty queen" and "simply stunning."

Anyone who has been following Karisma Kapoor on Instagram would be aware of the fact that the actress frequently delights her fans with throwback pictures. Last week, the 44-year-old actress shared an oh-so-adorable picture throwback picture of herself from her childhood days and she captioned it: "An apple a day keeps the doc away." She added the hashtags "#weekendwisdom" and "#childhoodmemories" on the post.

An apple a day keeps the doc away ! #weekendwisdom #childhoodmemories

As a part of her Flashback Friday post, Karisma shared a still from one of her films in the Nineties, co-starring Salman Khan and asked her fans to guess the film's name."Hitchhiking in which film? She accompanied the post along with the hashtags "#guessinggame" and "#flashbackfriday."

Karisma Kapoor's breakthrough film was the 1996 romantic-drama Raja Hindustaani, opposite Aamir Khan. She is best-known for her performances in films like Dil To Pagal Hai, Judwaa, Biwi No 1Zubeidaa and Fiza to name a few.

Karisma Kapoor took a break from her acting career in 2003. However, she did make cameo appearances in films several Bollywood films. She was last seen in Anand L Rai's 2018 film Zero, starring Shah Rukh Khan, Anushka Sharma and Katrina Kaif, in which she made a special appearance.