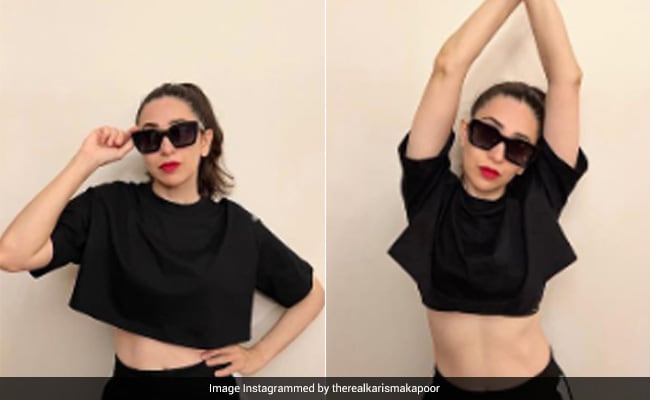 Karisma Kapoor is a true diva. She is one of the actresses who can simply make our working weekends interesting. How? By just posting some oh-so-beautiful pictures. On a fine Saturday morning, Karisma felt like playing with the camera. Here, she is striking a variety of poses. The pictures are in form of a grid. And, we are dead. Karisma is a sight to behold in an all-back uber-chic outfit. For that much-needed oomph, Karisma has picked a pair of shades and pulled her hair back in a pony. Oh boy. It is hard to take our eyes off Karisma. In the caption space, Karisma wrote, “Grid in a Grid.”

Karisma Kapoor's Instagram posts are all things fun. She started the week by dropping a picture straight from her bedroom. Here, Karisma, who is still in her night suit, is sitting on the bed as she makes a goofy face. “Still living in the weekend,” read her caption.

Karisma Kapoor will be next seen in Brown: The First Case, directed by Abhinay Deo. The drama series is based on Abheek Barua's book the City of Death. Apart from Karisma, the show also stars Surya Sharma. The Neo-Noir crime drama is set in the city of joy - Kolkata.

Veteran actress Helen, who was last seen in Fashion, will also mark her return with this series. “When I was first approached, what put me at ease was the clarity and assurance the team gave me about my role. I identify with this character and I plan to simply enjoy myself as I return to the set," Helen was quoted as saying.