Karisma Kapoor Is Still Living The Weekend Life On A Monday

Dressed in her pyjamas, Karisma Kapoor looks cute as a button in the photo 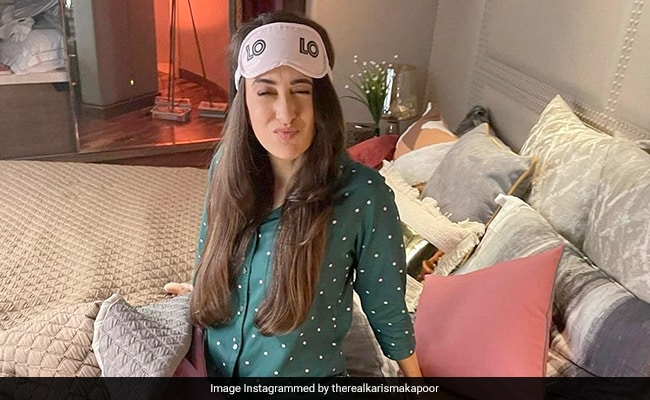 Karisma Kapoor has been a Bollywood heartthrob for decades now and there is a reason for her ever-growing fan following. While the actress is widely celebrated for her acting skills, her social media presence is always a breath of fresh air. And the best part? Karisma always keeps it real. Take, for instance, the actress' Monday morning post. In it, Karisma is seen dressed in a green pyjama set, attempting to get off her bed with a goofy expression on her face. Her eye mask is still on, making for an adorable photo. In the caption, she wrote, “Still living in the weekend. Monday Mood.” All we can say is - same Karisma, same.

Recently, Karisma Kapoor had millennials and Gen Z social media users scrambling to take notes when she dropped a video of herself striking some poses in the lift. Showing us why she will always be our favourite diva, Karisma grooved and sashayed through the lift and even a street with ease and swag. In the caption, she said, “The Liftie series continues.”

Before that, Karisma Kapoor shared Instagram Reels in which she is fixing her makeup and earrings in front of a mirror with the song Chaand Baliyan added in the background.

The video mentioned above was in fact shared from the evening of her friend and co-star Salman Khan's Eid party. In fact, Karisma Kapoor shared two images from the party in which she is sharing a hug and a laugh with Salman. In the caption, Karisma wrote, “Back with the OG. Eid Mubarak everyone.”

On the occasion of her mother Babita Kapoor's birthday recently, Karisma Kapoor even treated fans to a throwback image. In the black and white picture, a baby Karisma is seen sitting in her mother's arms. In the caption, she wrote, “Tum jiyo hazaro saal, ye meri hai arzu. That's what we wish for every day...The OG birthday song "Happy birthday to the original Sunita" our Mama Circa - Farz 1967."

On the work front, Karisma Kapoor was last seen in the 2020 web series Mentalhood.

"What Is This Face?": Shibani Dandekar Asked Farhan Akhtar This Question And Then Answered It Herself