Karisma Kapoor On 1994 Song Controversy: "Today The Word Sexy Is Used At The Drop Of A Hat"

Karisma Kapoor in an interview said, "It was made huge deal ki 'ye kaisa gana hai (What type of song is this?)'" 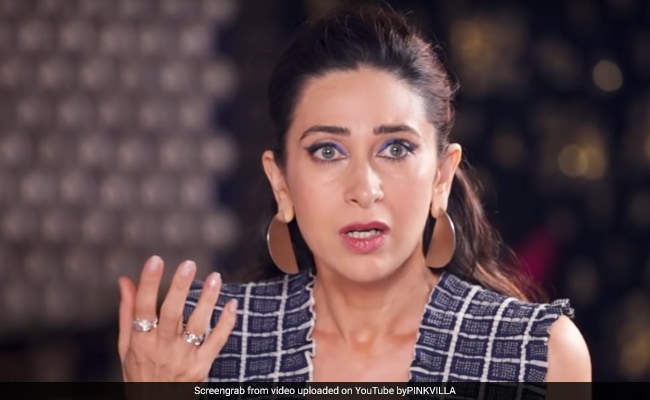 Karisma Kapoor in a still from the interview. (courtesy: YouTube)

It's an iconic song now but when "Sexy Sexy Mujhe Log Bole" from 1994 film Khuddar released, it raised several eyebrows. Over two decades later, the star of the film (and song) Karisma Kapoor has addressed the controversy, telling Pinkvilla that "a huge deal" was made of the song's lyrics at the time - now, the use of the word "sexy" would ruffle no feathers. Karisma was 20 when she starred in the film with frequent collaborator Govinda; after widespread objection to the lyrics of the song, written by Indeevar and sung by Alisha Chinai, they were changed to "Baby Baby Mujhe Log Bole." Remastered versions of the song are now available with the original lyrics.

Speaking to Pinkvilla, Karisma Kapoor said, "Today the word sexy is used at a drop of a hat. Actresses today are wearing tiny shorts or bikini tops and that time I was fairly covered. But still, it was made huge deal ki 'ye kaisa gana hai (What type of song is this?).'"

Karisma, noted for her dance skills, said she had hoped at the time that her mastery of the difficult moves in the dance routine that accompanied the song would be noted - instead, they were overshadowed by the focus on the lyrics. "I remember I was so young, I had bruised knees and elbows doing those difficult steps in the song thinking people will appreciate it and they'll love my dance. Yes, people appreciated the talent side but a lot of views were like, 'What are these wordings,'" she told Pinkvilla.

In 1994, her name still spelt with an H after the S, Karisma Kapoor was one of the top stars working in the industry. However, success didn't come easy, she says. "There were many rejections. It was not easy. I cried myself to sleep," Karisma, now 45, told Pinkvilla.

Karisma Kapoor put her career on hold after marrying businessman Sanjay Kapur in 2003, returning to the screen sporadically after the marriage ended. Her new web-series, Mentalhood, is Karisma's first role in several years. Speaking of Karisma's comeback, her sister Kareena Kapoor told news agency IANS, "I think everybody is excited especially for Lolo (Karisma's pet name). I think we all, as fans, have waited for her, to watch her on screen."