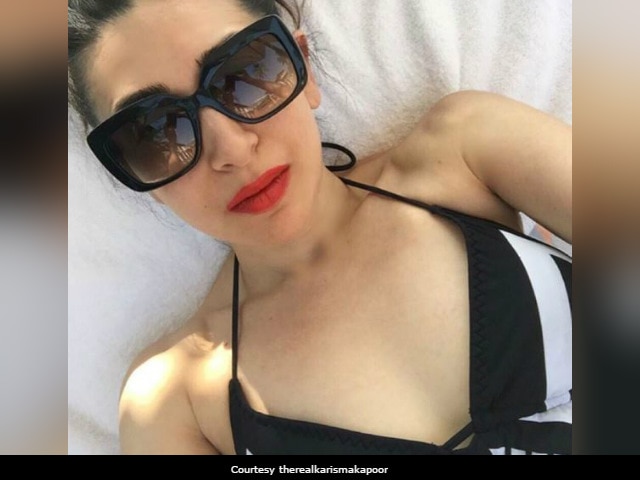 New Delhi: The Kapoor sisters - Kareena and Karisma - often sets the heat soaring off the charts. Actress Karisma Kapoor had a perfect Sunday, or so it seems. The actress, 42, was in an absolute mood to relax and spared a moment to share a selfie on Instagram, which is making some of us very, very jealous. Dressed in a monochrome swim-wear, Karisma sported a soothing red lip-colour and over-sized shades. Her caption says she officially welcomed summer with this selfie: "Sundays be like #summertime #Sunday #summerishere (sic)." Karisma Kapoor also indulged in a family lunch with mother Babita and Kareena on Saturday. The sisters were clearly on a selfie spree, the result of which has been produced below.

Karisma and Kareena were recently vacationing in London, from where the Raja Hindustani actress shared regular updates. Karisma and Kareena also hung out with their Mumbai friends after touching base in Mumbai. Meanwhile, Kareena attended Karan Johar's party on Saturday night with husband Saif Ali Khan, where Karisma was not spotted.

Who's ur favourite shopping partner ? #sistersquadgoals#sisterlove#londo

Promoted
Listen to the latest songs, only on JioSaavn.com
Meanwhile, Karisma Kapoor is often photographed with her rumoured boyfriend Sandeep Toshniwal - Karisma and Sandeep were spotted arriving together at her granduncle Shashi Kapoor's Mumbai residence for a family party. Karisma is divorced from businessman Sanjay Kapur and has two children, daughter Samiera, 11, and son Kiaan, 6.

Karisma Kapoor, who was once a popular Bollywood actress, is best remembered for films like Raja Hindustani, Zubeidaa, Biwi No.1, Dil To Pagal Hai and Andaz Apna Apna. Karisma is expected to feature in a cameo in Judwaa 2, the remake of her 1997 original film.