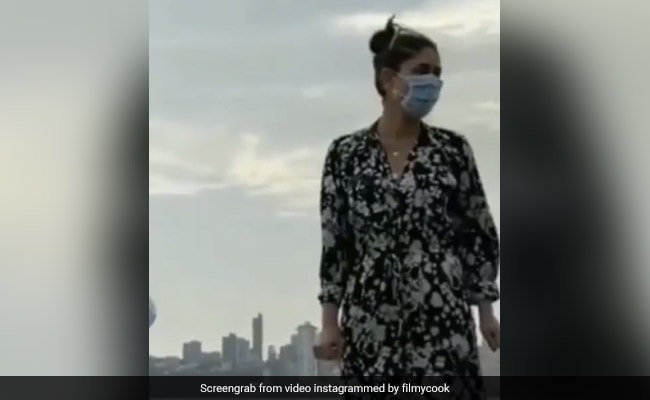 Just a few days after the government allowed certain outdoor activities, Mumbai witnessed a crowd of masked people walking and jogging at Marine Drive on Sunday. Bollywood star Kareena Kapoor and her husband Saif Ali Khan also stepped out with their son Taimur Ali Khan on Sunday evening. Pictures from the Pataudi family's day out have been spreading like wildfire on social media. Kareena was seen wearing a black printed dress and white sneakers along with a mask. Saif Ali Khan was dressed in his staple white kurta-pajama set. Saif was photographed carrying his son Taimur on his shoulders.

See the pictures and videos here:

Kareena Kapoor and Saif Ali Khan have been keeping their son Taimur, 3, busy during the lockdown. Kareena shared glimpses of Taimur's paintings on Instagram. The actress also shared pictures of Saif and Taimur planting saplings in pots.

If there is a wall that's blocking your creativity... Try painting on it #QuaranTimDiaries #InhousePicasso

Kareena Kapoor met husband Saif Ali Khan during the filming of the 2008 film Tashan. They have co-starred in films like Omkara, Agent Vinod and Kurbaan. They got married in the year 2012 and the couple welcomed Taimur Ali Khan in 2016.

Saif Ali Khan has a super busy schedule. The actor starred in the period drama Tanhaji: The Unsung Warrior and comedy drama Jawaani Jaaneman, this year. His upcoming projects include Hunter and Bhoot Police.